WE ARE NOW LESS THAN A WEEK AWAY from the launch of Samsung’s much hyped Galaxy S10 range, which looks like it’s the company’s best smartphone yet. Only that it will not be cheap, but for sure, it will ring a price lower than Apple’s current flagship iPhones.

Samsung officially marks the 10-year anniversary since the first Galaxy S flagship was released, and the event has been made to coincide with the launch of a major flagship Galaxy S smartphone. Not a new concept in tech, Apple did a similar thing with the release of the iPhone X, and our fingers are crossed for the Galaxy S10 to be truly special.

So far, we’ve had murmurs about the upcoming release, features, prices and models. One particular leak is quite thrilling, and hope it holds (sure it will as it comes from a reliable source), for folks who want to spend less but still enjoy Galaxy S10 features.

The latest leak comes from folks at GSMArena who have gotten their hands on what is reportedly the final specifications for three iterations of the Galaxy S10 base model: Galaxy S10, S10e, and S10+.

According to GSMArena, Samsung will be unveiling three handsets in less than a week and they went ahead to report on the final specifications of the Galaxy S10, S10e, and S10+. The specs-leak reiterate with a lot of what we’ve been hearing for months, particularly the 6-12GB of RAM depending on the model you choose, Infinity-O AMOLED displays, and ultrasonic in-display fingerprint sensors for the S10 and S10+ models.

Then, there are a couple of things that stick out as completely new

Since the rumors hit the online forums, suggestions have been that the Galaxy S10+ will have a 6.4-inch display, but in the latest specs, it will be 6.3-inches.

They also mention the displays to have 800 nits for their brightness, which if true, makes them the brightest phones Samsung has released to date.

Again, it is the first time we’re getting in-depth details about the cameras. If we go with this leak, here’s what you’ll be seeing in the new models:

Less expensive Galaxy A Series to be released too: Galaxy A10, A30 and A50

In another explosive leak by MySmartPrice, Samsung is repositioning its entry level and mid-range lineup and renaming the A series in 2019. For that, the Galaxy A10, Galaxy A30 and Galaxy A50 will hit stores any time soon with better specs and bigger screens. All that is based on a leaked spec sheet of the trio, revealing all but their prices and availability.

As you can see from the leaked spec sheet, the trio of Galaxy A10, Galaxy A30 and Galaxy A50 are all mid-range phones that will ring mid-range prices. All of them will offers a few features like the ones found on the premium Galaxy S10 phones, but you’ll have to content with some tradeoffs.

“From the leaked specs list, all phones in the Galaxy A Series will have plastic rear panels instead of the glass cover on the Galaxy S10 phones.”

The phones in this series with sport notch designs, featuring Infinity-U and Infinity-V screens. The Galaxy S10, on the other hand, will feature an Infinity-O punch-hole camera. Also, the Galaxy A50 will have an in-display fingerprint sensor, which will be probably an optical sensor instead of an ultrasonic, like the case of both the Galaxy S10 and Galaxy S10+.

Other specs will include generous 6.4-inch and 6.2-inch screens, in as much as the resolution will be much lower than you’d get on the S10 equivalents.

On the flipside, the Galaxy A handsets will have step-down processors from what you have running on the Galaxy S10, with RAM and storage configurations starting at 3GB of RAM and 32GB of storage for the cheaper A10, and stretches to 6GB/128GB for the A50. The Galaxy S10 phones will have more memory ranging from 6GB to 12GB and storage from 128GB to 1TB, based on the model you choose.

Battery size is one area the Galaxy A phones looks better, at least on paper, than the Galaxy S10 variants. All three phones will feature 4,000mAh batteries. Of the three Galaxy S10 phones, only the Plus model is rumored to have a 4,000 OR 4,100 mAh battery, but all Galaxy S10 phones may feature expedited battery charging. 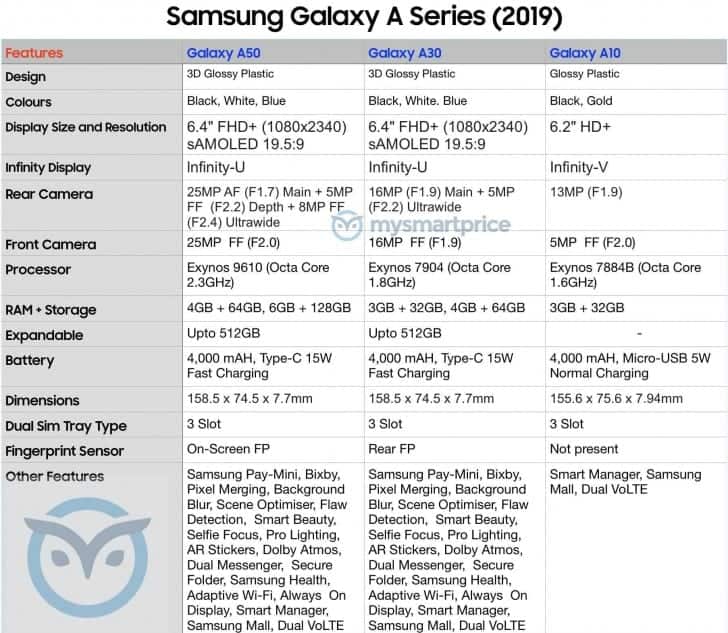 The full specs for the Galaxy A series are available in the image above, that was shared on Twitter by teen leaker Ishan Agarwal.

Based on the Galaxy A series specs available in the image above, the models share a set of features with the Galaxy S10, but they will surely rock lower prices. That’s our main interest at least for now. Budget-hunters have something to keep them excited. 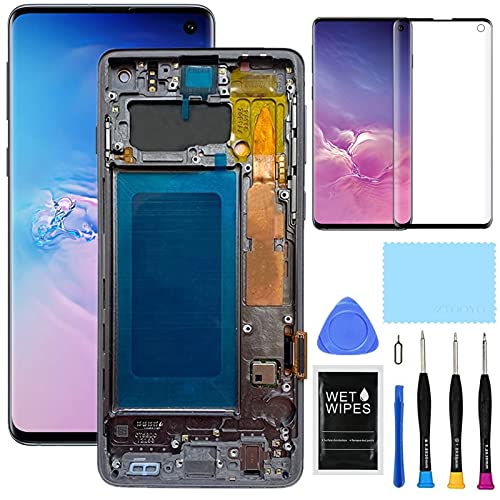 The phones will drop soon in several markets -or- they may be launching at MWC later this month.

While the specs sheet suggests three Galaxy A smartphones, the latest tip indicates that the Wi-Fi Alliance approved two more Samsung SM-A205F and SM-M305M. All this means that the Galaxy A family might be getting a fourth member named Galaxy A20. The other Galaxy M30 will join the already released Galaxy M10 and Galaxy M20. The Wi-Fi certification is not generous with extra info, but at least we know they will launch with Android Pie OS.