The TCL 50FS3800 Roku Smart LED TV series shows that, once again, TCL and Roku can work together to produce a very compelling budget HDTV.

If you’re on a tight budget, buying an HDTV requires some form of compromise. It used to be that you had to give up both picture quality and features. Now the TCL 50FS3800 Roku Smart LED TV (2015 Model) is one of the best 1080p Smart TV options that you can get your eyes on while you wait for 4K TV prices to drop. On most budget TVS you won’t get the best pictures without spending an appreciable amount of money, but thanks to Roku TV, you can have a full-featured, affordable big TV without breaking your bank.

The TCL 50FS3800 series isn’t just Roku Ready, but an actual “Roku TV,” building Roku’s online features and interface directly into the screens. Not only does this open up a vital HDMI port otherwise taken up by the Roku Streaming Stick, but it makes the entire experience much smoother.

By just looking at the TV set, you immediately realize that TCL really packs plenty of style and craftsman into its lower-cost HDTVs and giving more value to the customers. While it is not the most stunning, ultra-thin, metal-edged hallmark of engineering we’ve seen around, the 27.8-by-44.5-by-x 8.7 inch (HWD), 26-pound 50FS3800 looks simple and pretty attractive. It sits on a glass base, eschewing the plastic makeup of most cheaper displays with the option of installing two small legs to keep the television from tipping over…call them quad pedestal stand if you can! Let’s see what you get in the 1080p unit.

As expected of any budget HDTV, the 50FS3800 is a bit light on ports. While its three HDMI inputs are standard for a budget HDTV, the screen only has a composite video input as an alternative for sources. The lack of component video is unusual for any HDTV. The HDMI ports, along with a USB port, a 3.5mm headphone connector, an optical audio output, and an antenna/cable connector face right on the back panel. The composite video input faces directly back. A small control stick that doubles as the Power button sits on the lower-right corner of the back of the set.

Instead of a conventional buttoned wand, the 50FS3800 uses a pill-shaped remote similar to the ones bundled with Roku’s media hubs. It’s a small, cylindrical device with a prominent direction pad, menu and playback controls, and dedicated buttons for Netflix, Amazon Instant Video, Rdio, and Vudu. The Volume Up/Down and Mute buttons sit on the right edge of the remote, similar to the headphone volume controls on the Roku 2‘s remote, but without the handy headphone jack for private, wireless listening.

Unlike Roku-ready HDTVs that either come with an MHL Roku Streaming Stick or simply support one through MHL, the 50FS3800 has Roku’s interface built directly into the display. All of Roku’s content channels, streaming media services, and apps are available through the TV’s menu system. The Roku-designed menu also handles standard HDTV functions like picture settings and input selection.

The interface is very easy to use, but picture settings are overly simplified and slightly buried in menus, requiring you to individually change settings for each input if you want to access any picture tweaks—at least beyond a vague TV Brightness setting that’s separate from the standard Brightness (black level adjustment) setting.

What makes the TCL 50FS3800 Roku Smart LED TV tick isn’t just its price. It must be the built-in Roku ecosystem that deviates from the common smart TV app-streaming quality vs quantity dilemma. It’s not one or the other thanks to a slick interface that brings hundreds of more apps than its competitors. Roku offers several hundred online services and apps, organized as channels.

They include all of the usual streaming media services like Netflix, Hulu Plus, YouTube, and Pandora, plus various free and subscription-based specialty channels for sports, movie genres, news, weather, and international television. Roku also supports streaming content from your mobile device through the free Roku iOS and Android apps, and even lets you use your smartphone or tablet as a remote control. The TCL 50FS3800’s colors aren’t perfect, but they’re about as close as can be expected on an inexpensive screen, again rivaling the Sharp LC-55LE653U.

During the tests, The Amazing Spider-Man, very good, with a sharp, bright picture that offered balanced colors. Because of the mediocre black levels, dark shadows tended to get muddy and lose detail. But this was only noticeable in the dark alley scene, and even then it wasn’t enough to take me out of the experience. Flesh tones looked natural, if ever so slightly cool, and Spider-Man’s red and blue costume looked vivid and accurate.

On The Big Lebowski the colors were similarly bright and balanced. The harsh fluorescent lights of the bowling alley didn’t affect the varied skin tones of any of the characters, even if the overall picture still looked a bit cooler than ideal. For a budget HDTV, the 50-inch 50FS3800 shows a very nice, relatively accurate picture, but can’t rival some of the similarly priced HDTVs such as the 50-inch VIZIO E50-C1 or the more expensive LG Electronics 50LF6100 -both are 2015 models.

The TCL 50FS3800 Roku Smart LED TV series shows that, once again, TCL and Roku can work together to produce a very compelling budget HDTV. Even though its picture won’t wow you, at the price for a 50-inch screen loaded with Roku’s wide selection of content channels and media features, the bargain it presents will. 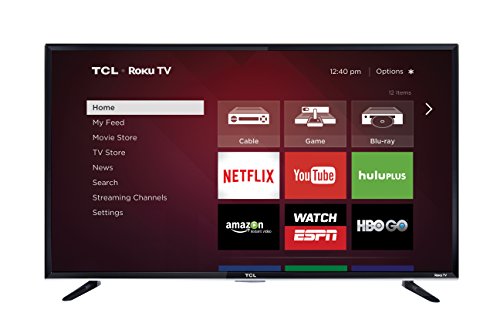 If you want a big screen with built-in Netflix, Hulu, YouTube, and other features for a low price, it should be at the top of your list. Crisp clear pictures will set you back quite more on something like last year’s Sony KDL65W850C, which is a larger screen and offers incredible contrast, will cost you almost three times as much as the 50FS3800.

The 50-inch VIZIO E50-C1 is worth a long look as it offers better picture quality at almost the same price. Meanwhile, the LG Electronics 55EC9300 offers the best 1080p picture you can get thanks to its OLED panel, but even though it’s now available for just over a third of its initial price tag, it’s still a compelling purchase for if you can beat the price.