The SkyTech Rampage is not a top-of-the-line gaming desktop, but it does deliver decent gaming performance and solid hardware for the price.

Gaming is the average PC’s ultimate gantlet. There are many tasks that can squeeze life out of even the most powerful rig, but gaming is the only one an average user is likely to embark on. Most users will never edit a 4K movie, or decide to encrypt an entire hard drive, or batch edit thousands of high-res photos. Many will, definitely, at some point, sit down and play a game – and get surprised that their system is not worthy.

To be sure, you might be tempted to grab dream rigs like the Alienware Aurora R8, a technical masterpiece with wonderful achievements, but also an overkill for casual-midrange gaming. SkyTech, by contrast, decided to take a more balanced approach when it built our Rampage review unit.

The review unit does have a Ryzen 5 1600 (6-core), a GTX 1060 GPU, and 8GB of RAM, but its other specifications are more modest – and practical. Rather than rely on traditional spinning hard drives, it ships with a 500GB solid-state drive (SSD) to balance storage and performance.

The Rampage’s experience is embodied in its design, which looks like SkyTech is reliving how gaming rigs ought to be designed. Constructed from a Thermaltake Versa N24 case, the system measures about 20.1 inches in length, 21 inches in height and 9.7 inches across. It’s not as small as a CyberPowerPC Gamer GXiVR8060A7 or a Dell i5680-7813BLU-PUS, but it’s mid-way between those mid-tower systems and the traditional gaming behemoths.

The Versa’s look is clean and mysterious. Plastic exterior panels and metallic interior compartments make for a budget enclosure, that still has a glimpse of class, but the curvy front is what really sets the case apart. Lately, folks are opting for clear lines in gaming desktops, but the Thermaltake goes a step further to integrate façade into the case, adding depth to the design. SkyTech sacrifices the optical drive, but gamers likely won’t mind – everyone is downloading games from Steam, anyway.

While it looks great, the enclosure is an off-the-shelf model, it even has a Thermaltake logo, instead of SkyTech, and has the usual shortcomings. The LEDs come in a single blue theme, the exterior curves feel a bit dated, and the transparent side panel is rather small. These are features, not bugs. Such touches in a big case make upgrading easier, a bonus for the price you’re paying.

Unusually spacious, the Rampage’s enclosure looks utterly convectional and impending. The system has a conventional layout, with motherboard ports and a 120mm fan facing rearward, one Cooler Master Heatsink for purposeful cooling, and a pair of 120mm blue LED intake fans. Absolutely everything is visible through the system’s case windows, meaning everything is easy to access. All you need is a screwdriver.

The Versa N24 enclosure provides for one USB 3.0, two USB 2.0 and a headphone/microphone on the upper panel. Everything else is on the back, including: four USB 3.0, two USB 2.0. PS2 for legacy mice, dual-link DVI, VGA, HDMI and audio combo. More ports are set on the Nvidia GTX 1060 graphics card – one HDMI and three DisplayPorts. The GTX 1060 GPU supports VR headsets, thus the need to have multiple I/O ports. Bundled into the package is an RGB keyboard and mouse, monitor is bought separately.

As with any gaming desktop, performance is leveraged based on configuration. Our review SkyTech Rampage review unit is outfitted with a Ryzen 5 1600, a six-core chip with a 3.2GHz base clock, and a 3.6GHz boost clock, paired with 8GB of RAM. We’re more used to seeing the Intel Core i5 in budget gaming PCs, but lately both Ryzen 5 and Ryzen 7 are becoming commonplace.

The Ryzen 5 1600 used here is not the fastest around, but it offers exceptional value on productivity workloads that require multiple threads. And, it holds its own when gaming too. At least SkyTech had the good sense to include decent storage options. Our review unit is outfitted with a 500GB SSD. That’s an increasingly common setup, even at the price point, although occasionally PCIe drives show up in the highest-end gaming systems.

In day-to-day performance, the Rampage can handle productivity well, never hesitating or slowing down. You can have 5 YouTube videos playing, while streaming Hulu and 10 Chrome tabs open. This desktop will handle all a ridiculous scenario like that’s fine.

The Rampage is labeled as a ‘gaming desktop’ so it better be able to play. Don’t worry – it can play pretty well! The system comes with a GTX 1060 (3GB), a VR-Ready GPU that offers decent frame rates on modern games. It makes a perfect showing in VRMark that tests how well a system can render in virtual reality, as it exceeds the requirements for powering Oculus Rift and HTC Vive VR headsets. The system should be able to handle most VR experiences at solid frame rates, though you might need to down a setting here or there.

As for games, you won’t be disappointed with performance. The GTX 1060 has nowhere near the power as something like the latest RTX 2080, but even at 1440p, most games are playable at smooth framerates with the settings cranked.

This rig averages 63 FPS in 1080p with settings on Epic in Fortnite cranked, whereas bringing it down to High settings will pop it up top over 80 FPS. The same goes for other lighter fare like Rocket League, where it earns141 FPS at highest settings at 1080p. If you want to try out 4K, lighter games like Rocket League or Fortnite, a GTX 1060 should be more than capable of achieving playable framerates at medium graphics settings.

Are there any alternatives?

If you want to save a little cash but not willing to compromise gaming performance, the Intel Core i5-9400F powered CyberpowerPC Gamer GXiVR8060A7 is an excellent alternative. On the other hand, Dell’s i5680-7813BLU-PUS is also reasonably-priced with a stealthier, office-friendly design.

Yes. It won’t satisfy people looking for a high-end system, but for anyone out for some casual PC gaming on a budget, the Rampage is for you. Still, the CyberpowerPC Gamer GXiVR8060A7 remains our Editors’ Choice, thanks to a sleek design, solid performance, and superior overall hardware. 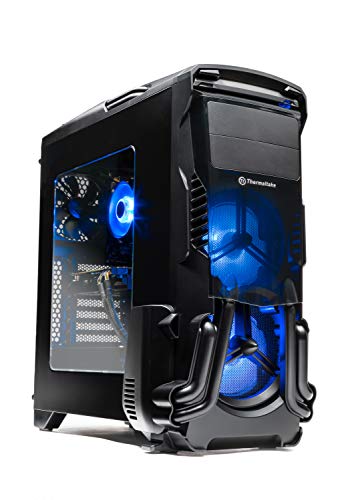