The SkyTech Gaming PC line offers capable gaming machines for various budgets, and the Skytech Blaze II is among the best entry-level models that will deliver solid 1080p gaming at a very reasonable price.

We always recommend that you build your own gaming machine for one reason – value. It’s also no secret that you can squeeze in better hardware for cash when you build your own system. But lately, we’ve seen prebuilts like the SkyTech gaming PC line that takes away the hassle of DIY, by offering expertly custom-built and tested machines for around the same price (in some cases less) that you would spend building your own gaming PC.

This line of machines is available at different prices and is configurable to include your choice of CPU or GPU, and that takes away the uncertainties of crafting your own rig. This means you can get even better performance for your hard-earned cash, get better in-game results, and some units are future-proof investments.

Our review unit, the SkyTech Blaze II is one such machine, that offers terrific value for your buck and will remain useful for a few years to come. Under the hood, the Blaze II boasts AMD’s Ryzen 6 2600 six-core processor paired with Nvidia’s GeForce GTX 1660 Ti graphics, a perfect combo for enthusiast-level gaming in 1080p. Additionally, it features a spacious, well-cooled case with cool RGB lighting for those who like some LEDs in their ideal gaming machine.

The Blaze II’s mATX tempered glass gaming case is designed in-house by SkyTech. Minus the glass, and curved front panel, it’s made of steel and it feels straight. It sports a straight-edged design that gives it a proper, if alluring, look. The Blaze’s 19.6 by 11.4 by 18.5-inch (HWD) dimensions are typical for a mid-tower. If you look around, you can easily get a similar-looking chassis in case you want to DIY your own build.

The front is smooth with a diamond-tip headline on the top and straight curves on the lower panel with a pair of RGB LED rings. Moving left the tempered-glass side panel does a good job of showing off the RGB-lit internals in this review unit. The panel opens to the side and is held by a pair of hinges at the back. I like the fact that the two thumb screws have retainers so you don’t need to fully remove (and potentially lost) them.

On the inside, cable work is neat, without any stray wires in sight. Maybe the only visible wires are the motherboard and CPU power connectors. The port selection along the front edge includes separate microphone jacks, one USB 3.1 port, and a pair of USB 2.0 ports. Around the back, there are four USB 3.0 ports, two USB 2.0 ports, DisplayPort 1.4, a PS/2 port for older mice, HMDI, DVI, and VGA ports.

It doesn’t include a USB Type-C port, but you have extra HDMI, DVI and DisplayPort connectors on the GTX 1660 Ti graphics card. You don’t get a monitor with this PC, but you can buy it as a combo that includes a 24-inch Sceptre C248W-1920RN, but you get a free RGB gaming keyboard and mouse bundled into the package.

There are various models in the Skytech gaming PC line, meaning you can shop for the ultimate machine based on your budget and gaming needs. The Blaze II model in this review is an entry-level configuration that’s powered by an AMD Ryzen 5 2600 processor, 8GB of RAM, 500GB SSD, and dedicated Nvidia GeForce GTX 1660 Ti graphics, which should have acceptable performance for most triple-A titles like Fortnite, but it’s slightly below the capabilities of the midrange SkyTech Shiva we reviewed recently.

The priciest preconfigured model in this series is the SkyTech Omega, which packs an Intel Core i9-9900K processor, Nvidia GeForce RTX 2080 Ti, 1TB SSD, and 16GB RAM. It runs at stock speeds, but the SkyTech Blaze II is ready for real-world productivity and content-creation workflows. When not playing, you can use it for media editing, MS Office tasks, and pretty much everything you’d want to do on a mainstream desktop PC.

The productivity capabilities above are helpful to measure the general processor aptitude, but it’s hard to beat full retail video games for judging a machine’s gaming credentials. Far Cry 5 and Shadow of the Tomb Raider, are both modern AAA, high-fidelity titles that can be used to illustrate how a system fares on real-world video games in different settings. These two games are run on the maximum graphics-quality presets – Ultra for Far Cry 5 and Very High for Shadow of the Tomb Raider, played at 1080p, 1440p, and 4K resolutions.

All these tests are meant to identify the sweet spot of visuals and smooth playability for any given system, with the results provided in frames per second. The different presets are based on the fact that Far Cry 5 is DirectX 11-based, while Shadow of the Tomb Raider can be run on DX12.

In our case, targeting a system in this price range means you’re most likely looking to play at full HD (1,920 by 1,080) resolution. Again, not only are 1440p or 4K monitors more expensive, but so is a GPU that will drive games smoothly at those resolutions. As such, our ideal target is 60fps and the Blaze II easily clears that bar with room to spare for more strenuous moments during gameplay.

If your monitor refreshes over 60Hz – can as well consider the Sceptre (C248B-144RN) or the MSI Optix MAG24C  both with a 144Hz refresh rate; the extra juice of the 1660 Ti is the way to go. This GPU replaces last year’s GTX 1060, meaning it is VR-Ready so it can run your virtual reality headset (HTC Vive or Oculus Rift) with ease. As you can see, 1440p is much more taxing (unless you’re okay with 30fps), and I wouldn’t recommend 4K on this machine.

Should I buy it?

SkyTech easily accomplishes what it set out to do with the Skytech Blaze II: which offers a professionally-built platform for enthusiast gaming. However, the Skytech gaming PC range has been updated to include better, nicely-designed, and more powerful machines.

Still, the pre-built model we’ve reviewed is reasonably priced as compared to going the DIY (do-it-yourself) route and assembling it yourself from parts. It’s hard to imagine anyone doing a superb wiring job, and the hardware selection in our review unit is simply top-notch.

Other highlights in the Blaze II include good cooling and a spacious design that looks pretty for the price and highly valuable when ordering and is upgradeable later. If you’re a semi-pro gamer but not a performance hound, or simply out for a desktop for your kids to play the most popular AAA games without a fuss, this is a great pick.

That said, the iBUYPOWER Element 9260 offers even better performance for around the same price. It boasts a much faster 9th Generation Core i7-9700F processor, the same Nvidia GTX 1660 Ti, more RAM (16GB), and lots of storage (240GB SSD + 1TB HDD) in a stellar custom chassis. it makes for a recommendable alternative to the SkyTech Blaze II, retaining our Editors’ Choice for the category.

Are there better alternatives?

Of course, we reviewed the Blaze II back in 2019, and the Skytech gaming PC line has been updated to feature more powerful and cost-friendly machines.

In early 2022, we reviewed both the Skytech Shiva, Skytech Archangel, and the Skytech Chronos and we were impressed by the design and hardware packed inside, over the Blaze II released earlier. This range of gaming machines offers the latest components including 12th-generation processes and Nvidia’s RTX 30 Series GPU that are capable of running the latest AAA games at high settings.

In the course of the year, we even reviewed a high-end iteration of the Skytech Gaming PC line-up – the Skytech Prism II. We liked it during launch, but we still like and we feel that it will remain part of our best-prebuilt gaming PCs list for a few years to come. With the Prism II, Skytech put together a beast that will run modern titles even at 4K hassle-free. It combines AMD’s Ryzen 9 3900X processor with Nvidia’s GeForce RTX 3090 (24GB), 32GB RAM, and 1TB to deliver the best of both worlds – gaming and productivity. However, that configuration doesn’t come cheap – it will cost you an arm and a leg but it remains a worthwhile investment if money isn’t a problem.

Having said that, it’s our tradition not to recommend a machine that’s over two years old simply because technology gets updated with newer components, and you’ll be surprised to buy a machine with the latest hardware for much less that an older system in the same range. As such, we will not be recommending the Skytech Blaze II in 2022. Yes, it was among the most powerful in 2020 when we first wrote this review, but it’s no longer among our top picks, even PC games themselves have been updated to demand newer hardware from PCs. 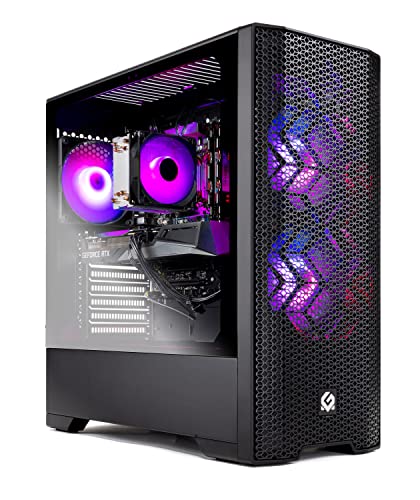 For around the same price as the older model, there’s a newer Skytech Blaze II that will let you play the latest games at high settings in 1080p. It’s powered by an AMD Ryzen 5 5600G processor, Nvidia RTX 3060 GPU, 16GB RAM, and offers 500GB SSD storage. If you’re stuck with the vibe of the Skytech gaming PC line-up and on a tight budget, the new Skytech Shadow 3.0 (2022) is a great choice. Have it on your short list as you shop around for an affordable gaming machine.