For budget gamers, the SkyTech Blaze (ST-BLAZE-1600-16G-1050TI-4G) looks like a great alternative to the all-too familiar conundrum of building one yourself, or going with an expensive prebuild.

Build it yourself, or grab a prebuilt model? That’s the classical dilemma we all face when shopping for a gaming desktop PC. With the Skytech Blaze, the company aims to deliver the best of both worlds in a mid-tower chassis. Designed for casual gamers, like the SkyTech Archangel we reviewed earlier, the Blaze is offered in three prebuilt configurations (SkyTech has dubbed them Level 1 to 3) to cater for most budgets, maxing out with AMD Ryzen 5 6-core chip, Nvidia GeForce GTX 1050 Ti and 16GB RAM.

Our review unit today is the SkyTech Blaze (ST-BLAZE-1600-16G-1050TI-4G), which sits at the top in this category with Ryzen 5, GTX 1050 Ti and 16GB memory. Like most pre-built PCs, it has spotless attention to details, with red LEDs on the chassis, has smart part selection and superb overall performance that make it an alluring mid-tower for the price.

Did SkyTech manage to create a value-packed PC that can easily replace doing the DIY thing?

The SkyTech gaming PC isn’t an off-the-shelf mainstream desktop. It is a boutique-build system, meaning you’re likely going to bump into the case and certain internal components in other competing systems. A major part of it is cut from standard parts that have aftermarket equivalents, the branding notwithstanding.

In fact, most of the parts used here are aftermarket to begin with, such as the casing, motherboard and graphics card. The only allure of getting a prebuilt desktop from a system builder like SkyTech is, essentially a product of the aftermarket, that has been expertly assembled and covered by warranty. You never have to deal with individual part warranties, just a single destination in case you encounter issues along the way.

The black chassis gets a honeycomb mesh on the front panel that allows for some flair, thanks to red LEDs that breathe from the inside. A thermaltake H18 tempered glass case covers the left side panel, giving you a clear view of the internal assembly, including three front fans, one back fan, and a Master CPU heatsink.

Having a tempered glass side panel is becoming common, and we’re glad budget PCs are picking up the bait. The system measures 15.4 x 8.1 x 15 inches and weighs 23 pounds, highly typical dimensions of a mid-tower PC. Its other stablemate, the SkyTech Archangel Elite comes in a white enclosure, with blue LEDs on the front and sides. 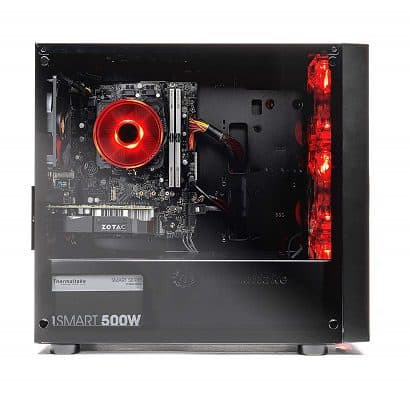 Port selection is just typical for any sub-$700 gaming PC, with ports on the front edge as well as the read flank. Port selection along the front edge include separate headphone and microphone jacks, one USB 3.1 port and two USB 2.0 ports, alongside a power button and another one for changing the LED color profile.

Around the back of the ST-BLAZE-1600-16G-1050TI-4G, there are four more USB 3.0 ports, two USB 2.0, one Display port 1.4, PS/2 port for older mice,  one HDMI, one DVI and HD mic and audio inputs. Wireless connectivity comes via PCie AC Wi-Fi with an antenna. Last year, we did a SkyTech Oracle review, and we finally see where the company is getting its inspiration for budget systems.

It doesn’t include an optical drive, USB Type-C like most midrange rigs, something skipped to keep the price low. Also bundled into the package are a SkyTech gaming keyboard and mouse, only that you’ll have to buy a gaming monitor like 21.5-inch FHD Acer SB220Q bi separately. 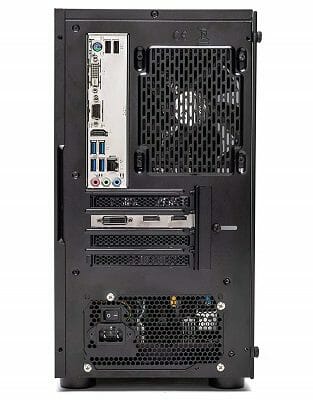 Our SkyTech Blaze review unit is the most powerful configuration preset that the company is offering in this chassis. It includes the entry-level 3.2 GHz AMD Ryzen 1600 processor that maxes at 3.6 GHz in Turbo mode, Nvidia’s GeForce 1050 Ti (4GB) graphics card, 16GB system memory and a 1TB 7200RPM hard drive. The Ryzen 1600 is a 6-core chip that, while not the most powerful, does a good job in delivering good performance on daily productivity.

With 16GB of RAM in to and a 3.2GHz processor, this SkyTech gaming PC is well suited for real-world productivity and content-creation workflows. It will deliver stable performance for office-centric tasks including word processing, spreadsheets, web browsing, and if you’re a professional creative, you’ll easily get away with media creation. For sure, this is a mainstream gaming PC, but it’s also capable enough for almost all your everyday productivity work.

A few years back, snagging a dedicated graphics option in a budget system was unheard of. Now, they come fast and furious, in different sizes and at prices that can even buy you Samsung’s latest flagship phone. Case in point: the SkyTech Blaze ST-BLAZE-1600-16G-1050TI-4G comes in at a very low price, but manages to pack a dedicated Nvidia GeForce GTX 1050 Ti graphics card with 4GB.

A budget graphics option it is, it doesn’t even meet the basic threshold for VR gaming (requires GTX 1060 and above), but it plays as it was meant to. It offers smooth frame rates on modern titles played at 1080p, averaging 96 frame rates per second (FPS) on Titanfall 2, 68 FPS on Battlefield 1 and 47 FPS on Fallout 4 played in 1080p at maximum settings.

Our average FPS for this category is 60 FPS at maximum settings, and the SkyTech Blaze easily yields on most AAA games. Compared, these are the same score you’re getting from the likes of the CYBERPOWERPC Gamer Master GMA1390A2 and the SkyTech Archangel 2, both outfitted with a similar video card, but come behind the iBUYPOWER Slate2 070i that packs a GTX 1060 GPU and a speedy 8th-generation Intel Core i7 8700 processor, but costs slightly more.

For budget gamers, the SkyTech Blaze (ST-BLAZE-1600-16G-1050TI-4G) looks like a great alternative to the all-too familiar conundrum of building one yourself, or going with an expensive prebuild. The DIY route gives you your choice of parts and some potential costs savings, but if you’re building on a budget, you may end up spending more. As such, SkyTech Blaze strikes a happy medium with the new SkyTech Blaze series. There are a fair number of options available to you if you’re willing to spend around $200 to get newer hardware and components.

One such alternative is the newer SkyTech Blaze II that tops out with a performant AMD Ryzen 5 2600 six-core processor, an Nvidia GeForce GTX 1660 Ti, 8GB RAM and a peppy 500GB SSD for storage. On the other hand, our Editors’ Choice for midrange gaming desktops, the CYBERPOWERPC Gamer Xtreme GXiVR8060A8 that tops out with Intel’s Core i5-9400F six-core processor chip, Nvidia’s GTX 1660 GPU, 8GB RAM and 240GB SSD + 1TB hard drive storage.

Given a choice of the two I would easily go for the CyberPowerPC Gamer; one, for the price-value it offers and second for the timeless design and room for expansion. But if you’re looking for something inexpensive for future upgrades, the SkyTech Blaze is a great choice. 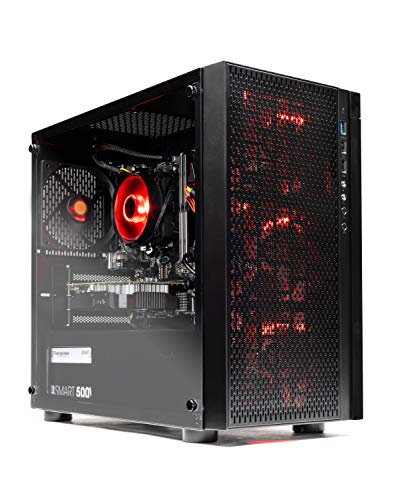