The Samsung UN65MU7000 is a UHD TV that delivers excellent performance with a gorgeous, minimal design and costs almost half what you’d spend on an OLED panel. It adds a feature rich SMART Hub interface that rounds it up into a very compelling package.

Samsung’s QLED line of flagship of TVs are promoted as an answer to LG’s OLEDC7P Series, only that they don’t come cheap. For that, they always make other solid LED-backlit models for the rest of us. The Samsung UN65MU7000 sits near the top of its non-QLED lineup, with 4K resolution and high dynamic range (HDR) support.

The 65-inch UN65MU7000, is markedly less expensive than any UHD model around. It features impressive contrast and acceptable color gamut. The picture quality justifies the cost, and a color range that’s both impressive and accurate out of the box, make the UN65MU7000 a fantastic choice.

The Samsung UN65MU7000 sports a stylish and attractive aesthetic, that’s fairly laid back with a few notable flourishes. The 65-inch screen is covered by a trim of glass, that runs, bezel-less, to the edges of the panel. Behind the glass pane is a thin, gunmetal-colored metallic strip running on all edges.

The TV’s frame is a silver colored metal, that tapers on the edges like you’d find in a smartphone. Supporting the screen is a Y-shaped stand that hooks up to the back of the TV with a single arm.

You’ll find only standard inputs or outputs on the back of the UN65MU7000. An ethernet port, two USB ports, three HDMI (one with Audio return), and component, composite, Digital Audio Out and RF-In connectors. If you’re familiar with Samsung sets, you’ll realize that they dropped the OneConnect box on this model.

Instead, all connections are now on the back of the TV, and not on the proprietary OneConnect box. It does support Wi-Fi connectivity, so you won’t be using the ethernet port much to stream content and its other Smart TV features.

The Samsung UN65MU7000 remote is a tiny, slightly curved wand measuring 6.4 inches and just over 1.4 inches wide. It has a more pronounced circular navigation pad, flanked by power, number, voice, and color buttons on the top, and back, home, and play/pause buttons on the bottom.

You don’t have physical numbers, rather a button that displays on-screen numbers (0 to 9) or colors (red, green, yellow and blue), just like you’d find on some home entertainment devices. A pair of buttons sit below the buttons and are used for Volume and Channel options. Overall, it’s a minimalist, functional remote that is quite straightforward to use.

The Smart Hub platform powered by Samsung drives the TV’s connected features. As expected, the interface is clean, attractive and has plenty of useful features including voice search and a web browser. It also supports screen mirroring for supported PCs and mobile devices through WiDi and Miracast, that are being phased out in favor of Google Cast. For those who don’t have Samsung devices, you can use a Chromecast for screen sharing.

Samsung takes a good hit at Smart Hub app selection, but its tiny when compared to Roku TV, Amazon Fire TV, or Android TV. Still, it gives you access to major streaming services, including Amazon, Google Play Movies & TV, Hulu, Netflix, and Vudu. But, it doesn’t include streaming sites like Sling TV or DirectTV Now, or even Crunchyroll or Twitch. Music options are plentiful, though, including Deezer, iHeartRadio, Pandora, SiriusXM, Spotify, and TuneIn.

Contrast levels, brightness levels and color accuracy are the main features we all look out for in HDTVs. The Samsung UN65MU7000 delivers an acceptable contrast ratio, although slightly below what you’d find on most OLED televisions, but it is still a respectable showing, especially for a TV on the lower price range for 4K HDTVs.

It delivers content at Ultra High Definition (UHD) resolutions, which is a is a consumer display and broadcast standard with a resolution four times that of a Full 1080p HD resolution: 3,840×2,160 pixels. On the other hand, true 4K displays are used in professional production and digital cinemas and feature 4,096×2,160 pixels.

If you want better performance than either UHD or QHD options, you’ll need to invest a lot more in an OLED television, like the Editors’ Choice LG OLED65C7P its panel technology allows for perfect black levels, for vastly superior contrast. The TCL 55P607 offers an equally excellent black level but you’ll have to do with half the contrast ration, though it will display a broader range of colors just like both TVs without any color skewing or tinting.

The MU7000 supports high dynamic range (HDR) that enable it to display a wider color gamut. This combined with Samsung’s 4K Color Drive Pro enable the TV to have an impressive reach among colors, particularly green, while yellow leans cool. The TCL 55P607 offers similar color range and slightly more accurate whites, while the Sony XBR55X900F series blows both out of the water in both color range and accuracy.

BBC’s Blue Planet II Trailer on Ultra HD looks very good on the MU7000, with vivid colors that are well balanced, natural and not oversaturated. The never-seen greens and blues of the plant life, and silvery surfing dolphins in “One Ocean” episode are very rich. The texture of sea weeds appears well-defined, and the polar bears and walrus stand out crisply against the melting ice. The polar bears’ white fur and the walrus’ grey bodies keep detail without losing saturation.

Input lag is the amount of time it takes for a display to update after receiving a signal, and this is one of the few areas in which the Samsung MU7000 doesn’t crunch the numbers quite well, but is still fair compared to competing HDTVs. The HDTV showed an input lag of 87.3 milliseconds, which isn’t far apart from competing panels.

If you play very fast-paced video games that require precise inputs, this might not be the best tv for you, but for the price, it’s one of the best value you can get. Ideally, a dedicated gaming monitor can show less than a tenth the input lag of the Samsung UN65MU7000, but for big screens you’ll have to realistically settle for a third to half the lag.

As expected, the very bright panel makes the UN65MU7000 a not-so-efficient energy saver. Under normal viewing conditions, it consumes 178 watts. Setting the Power Saving feature to Low will dim the screen noticeably but will remain watchable, dropping the consumption to 67 watts. Higher Power Saving settings dim the screen too much to watch comfortably. 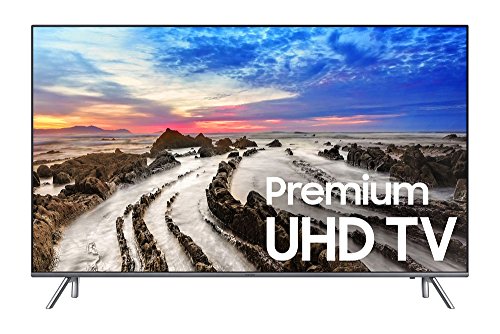 The Samsung UN65MU7000 LED TV offers great picture with a design aesthetic that is much sleeker and attractive that what you’d ever find in any budget television. In fact, it forms the baseline footprint for the sleeker MU8000 and MU9000 Series of Samsung TVs. Its colors are cool out of the box, but it otherwise does a nice job in delivering excellent picture quality, alongside Smart Hub connected features.

If you can’t spare some money for the LG OLED65C7P TV but still want a timeless style and good performance, this Samsung UN65MU7000 is an excellent choice. That said, the perfect black levels and color accuracy found on LG’s panels mean that the LG OLED65C7P remains our Top Pick for high-end televisions.