Home » Samsung Galaxy Book Flex vs iPad Pro: Is it time to make the big switch?
2-in-1 ConvertiblesNews

I don’t think anyone was eager for the announcement of iPad OS more that I was last year. I have always paid top dollar for Apple’s iPad Pros for the longest time, so the thought of finally getting something that offers a simple desktop experience or a portable file manager is all I needed. Not that the iPad Pro has become a letdown, but the fact that Safari does tell websites that it’s a computer and not a phone, makes the entire experience a miss, yet it still behaves like a phone.

While we now have a file explorer with the new update, the whole approach of accessing files between apps, or sharing them is still clouded by some unnecessary steps.

My thoughts were iPad OS 14 would address those issues, but neither of those things were addressed, and just why widgets aren’t working on the larger canvas is just beyond me. And I get it, maybe, Apple aren’t willing to have their own handheld compete in certain ways with the Mac; but while at it, have you though how much it takes to nab a fully equipped iPad Pro? And, maybe compare the price with the Samsung Galaxy Book Flex, and its spec sheet as well.

And here’s the thing, I have been looking for a better alternative. A portable tablet with pro-grate support for creative use, and one that can be a full-blown computer without restrictions for other uses, something the iPad failed to deliver. The mainstream ultraportable laptop is really close to this, but portability holds it back. I thought the Pixel Slate would be it, but we know it crashed as fast as it came. Next in line was the Microsoft Surface Pro, but somehow it didn’t hit my taste buds. Somehow, I was starting to love my iPad Pro, until the Galaxy Flex popped.

How does the Galaxy Flex stack against the 2-in-1 premium competition? Well, Samsung dubs it as QLED brilliance, built into a powerful convertible, and sure, there’s a reason why this product ticks most boxes.

However, I will have to clarify that my use of the iPad Pro wasn’t all about the device itself. My needs were set on a product that would deliver a seamless combination between a tablet, a precise stylus, and some Microsoft OneNote. Thing is, Smith’s review from a few weeks ago left me convinced that this was the product I was looking for, and so far, there’s a lot to say. From the review, it isn’t about the Samsung Galaxy Book vs iPad Pro, nor is it a Samsung Galaxy vs Surface Pro, it’s just down to the bare knuckles of what the Galaxy Book Flex is.

Considering both the Galaxy Flex and iPad Pro come at a steep price, we can’t rely on a product being a hit or miss, but rather a product that offers convenience and works as it should.

First, the Galaxy Flex has a different design language altogether. We’re used to laptops with huge palm rests, but for some reason Samsung opted to tweak things around to provide the same experience, but on a smaller footprint. The result is a wider-than-average 2-in-1 that pushes the keyboard closer to the center, and a wider touchpad that doubles as built-in Qi wireless charging pad for you enables smartphone and other gizmos.

Second, this is not a watered-down computer. It is Samsung’s top of the line PC rocking an intel 10th Generation Core i7, available in both 13-inch and 15-inch versions, as well as the option of 8 or 12 gigs of RAM and 512 Gigs of SSD storage. You also get Wi-Fi 6, Bluetooth 5, microSD, two Thunderbolt 3 ports and USB-C on one side.

Third is the display technology. If you’ve watched the Samsung Q90R, you’ll notice why QLED or Quantum Dot technology is such a big thing. Apart from allowing for some of the most vibrant colors you’d ever experience, it does offer some great brightness that you can boost outdoors with the touch of a button. Sure, I agree that the 1080p resolution would be great, but this display makes it really hard to notice, and on the 13-inch screen, you might easily confuse it for a 4K resolution.

Fourth must be the S Pen. This is a feature I’ve always wanted, and on the Galaxy Flex, Samsung includes a WACOM digitizer, and that little extra block on the right side of the computer works the exact way as the S Pen you get on the Galaxy note, meaning the silo design keeps it charged while tucked in and also spares the need to worry about magnets or having it fall off. Battery life remains impressive at over 16 hours on a single charge, that’s not something rival 2-in-1 will match anytime soon.

The S Pen can be used to call commands for: taking and viewing notes, using the pen to make drains for a screenshot and you can even annotate the screen. For creatives looking to doodle or draw or take notes with handwriting instead of using keys, this feature is very handy. 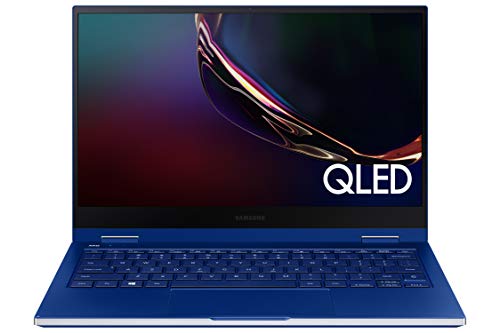 Oh yeah…I do think its finally time to switch. But listen, not that I hate the iPad Pro, it is still a great product, but what is a powerful tablet on paper if the operating things cannot do more than just iPad things. In their current design and state, I do think Apple should just tone down the Pro name to cater for artists, musicians and designers.

The Galaxy Book Flex, on the other hand, is a different breed of a pro-gadget, altogether. It has the character to serve all kinds of Pros, and even in the best economies, people can’t just buy a laptop and a tablet. The Samsung Galaxy Book Flex offers the power of a premium laptop, and the versatility of a pro-tablet, with some extras like excellent battery life and a gorgeous, sleek design. These are some of the main reasons why this has certainly become one of my favorite products of 2021.

Samsung Galaxy Book Flex vs iPad Pro: Is it time to make the big switch?
$999.00
SEE AT AMAZON