The HP Envy x360 15-es2026nr offers extraordinary value in a nice-looking design. Whether you’re looking for a 2-in-1 or just need an affordable 15.6-inch laptop for work, school, or both, the Envy x360 is exactly that machine.

If you occasionally need to use a tablet and a laptop for work but you can’t afford both, then the HP Envy x360 15-es2026nr could be the best machine for you. As ever, 2-in-1 convertibles offer the best of both worlds since they come with a 360-hinge that lets you switch between laptop and tablet in one simple motion. The Envy x360 combines sturdy build quality with a 12th Gen Core i7 CPU to deliver exceptional performance, but it may not be for everyone.

Well, this new HP Envy x360 looks beautiful and well-built, but there’s nothing unique about the design. It sports the same HP signature look, but it looks more beautiful than most notebooks n this price range. The touchscreen also looks great – even if it isn’t the 4K OLED you’ll find on most high-end machines like the HP Envy 16 or the Dell XPS 15 OLED. With a 1080p resolution, the 15-es2026nr looks decent inside and outdoors sitting at a coffee shop or, maybe, a work site.

However, using the 15-inch HP Envy x360 in tablet mode isn’t the best way to experience a 2-in-1. While you can flip the laptop into tablet mode, it’s still on the heavier side; some hybrid laptops feel like an iPad running Windows 11, but the Envy x360 doesn’t offer that feel.

The HP Envy x360 2-in-1 is available in various configurations, ranging from 13.3-inch versions to 15.6-inch models, like the one we’re reviewing. You also get to choose between mid-range and high-end Intel and AMD processors, 8GG to 12GB RAM, 256GB to 1TB of solid-state storage, and a choice of black or silver colorways.

As we said earlier, the HP Envy x360 is created for the professional, enterprise world and can be used by students as well, so it doesn’t disappoint in design. Like all other Envy x360s, the 15-es2026nr is built to be durable with an aluminum alloy chassis, and an attractive silver tone, but you can also choose a black tone in the same model.

The keyboard deck is a little cramped, as it accommodates two top-firing speakers on each side – you also have down-firing speakers at the bottom, which boosts the audio output but it’s still a 2-in-1 sound. While the speakers squeeze the keyboard itself somewhat, we found it still comfortable to type on since most of the keys we use aren’t overly affected. The only keys affected are the Home key, the Page up key, and the likes that have been moved around a bit to fit the smaller space available.

Otherwise, the individual keys are comfortable to type on and have good travel, while the trackpad has good size, but is not special in any particular way.

Port selection is excellent for a 2-in-1 laptop. Here you’re getting an SD Card slot, a pair of USB-C ports, and an HDMI out port.

The screen is gorgeous. It has very thin bezels surrounding it, with the edge-to-edge glass making it much bigger than its 15.6 inches. The touchscreen display has an IPS panel with a resolution of 1920 x 1080 and up to 400 nits, resulting in bright, vibrant images that bring everything to life. This screen is excellent for almost everything you’d want to do with this machine, may it be creating digital art content to streaming videos online.

But I must say streaming content on this machine is extremely impressive, not because of the 100% DCI-P3 for color accuracy, but also the 16:9 aspect ratio. And of course, Bang & Olufsen speakers deliver a punch when it comes to sound.

The Intel Core i7-1260P is an absolute stunner, racking up impressive benchmark scores and delivering smooth and snappy performance for an under $1000 laptop. It does hold its own against more expensive laptops like the Dell XPS 13 Plus and the LG Gram, but bother competitors sport sleeker designs and offer even better battery life among other features that justify the hefty prices.

For starters, the Intel Core i7-1260P packed into the HP Envy x360 an upper mid-range Alder Lake CPU designed for ultraportables, that’s why you’ll see it in most ultra-light laptops. Released in early 2022, this chip features 4 performance cores, a step lower than the top-tier Intel Core i7-1280P – used in the Lenovo ThinkPad X1 – which has 6 performance cores alongside 8 efficient cores.

This chip’s performance closely compares with that of the AMD Ryzen 7 5800U, that’s why you find most other HP Envy x360 models in this series arrive with the Ryzen 7 processors. The one area where the Intel-powered Envy x360 shines is in single-core performance, scoring 8956 points in Cinebench R10 benchmark tests, over its AMD Ryzen 7-powered variants. That isn’t surprising though, Intel processors perform better in single-core performance, while AMD’s Ryzen processors blow their rivals in multi-core processing or integrated GPU performance.

You’ll also be surprised how well the HP Envy x360’s Intel Iris Xe graphics handle both benchmarks and real-world use. While they won’t run the best PC games at high frame rates, natively, and without issue, you can get away with casual gaming at lower resolutions.

Overall, the HP Envy x360 15-es2026nr isn’t the most powerful performer among midrange laptops, but it gets the job done and doesn’t need much to do so. The Alder Lake processor’s single core and multicore performance put the Envy x360 in a comfortable spot performance-wise: it may not be as fast as the Apple MacBook Pro (with M2 chip) or other laptops that cost over a thousand dollars but is faster than most $600 laptops we’ve reviewed before.

For most productivity tasks at the office like writing emails, streaming movies, or running spreadsheets, the single-core performance matters more than the multicore performance; here, the HP Envy x360 performs powerfully enough to ensure you can multitask without any lag.

To test how long a laptop lasts in an average day of productivity, we cycle through thirty popular web pages at 200 nits of battery life until it completely drains. With a 51Wh battery, we expected the HP Envy x360 to last at least a full workday, and we found it lasted a little bit better than that, lasting just over 10 hours in PCMark 10 battery test, though HP claims over 11.30 hours.

In our tests that include Chrome tabs with HD movies playing in the background, it just didn’t make it over eight hours and 21 minutes. Still, eight hours is a lot of videos, more than enough to last through a transatlantic flight, and it only takes 30 minutes to charge from empty to around 50%.

Whether you’re looking for a 2-in-1 or just need an affordable 15.6-inch laptop for work, school, or both, the Envy x360 is exactly that machine. For under one grand, this laptop feels like a premium machine that ordinarily will cost more, and that sturdy all-metal construction is simply irresistible. And, the good battery life can stand up to laptops that cost as twice as much. 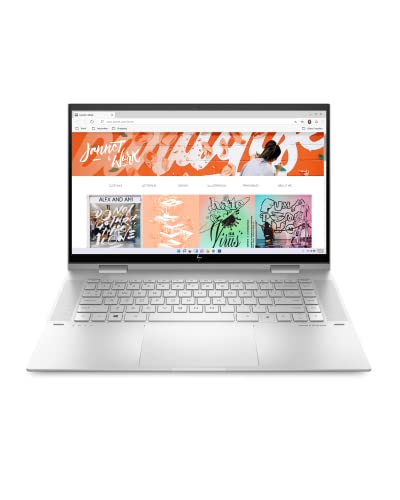 Last year, I loved the HP Spectre x360 13.5 for its elegant design, peppy performance, and spectacular display. But the Envy x360 is not a lot less expensive, and it is, for sure, a more formidable competitor to the MacBook Air M2 and M2 that its sibling. If it were my money being spent on a new, affordable 2-in-1 laptop, the HP Envy x360 15-es2026nr would certainly be at the top of my shopping list. It offers terrific value in a clean aesthetic that you can’t beat out there at this price.