The new HP Chromebook 14 14a-na0021nr is a good choice for anyone looking for an inexpensive Chromebook that can do simple tasks, like browsing the web, sending email or watching online videos.

Don’t have a lot of spare cash but need a functional laptop? If that’s you, then relax: You can pick the HP Chromebook 14 that should serve you well. It isn’t super powerful, but it will sort out your basic needs – accessing the web, creating and editing simple documents and watching some YouTube and Netflix.

The HP Chromebook 14a-na0021nr starts inexpensively for an Intel Celeron N4000 Processor, 4GB of RAM, 32GB of eMMC storage, and an HD (1,366 X 768) resolution 14-inch display. As speced, it’s a good first laptop for work, home, school and pretty everything in between, for as long as you stick to basic tasks.

Yes, that’s right: this is one of the few Chromebooks with B&O tuned speakers. Not only is it a very inexpensive laptop, but it looks quite unique. Does that give it enough of an advantage to be worth investing your buck? Let’s find out in this HP Chromebook 14a-na0021nr review.

Now, this is how budget should be one. Nicely.

The Chromebook 14 has an attractive design highlighted by a ceramic white chassis that is sure to stand out in a crowd. The lid has a rough texture with an embossed HP logo in the center, and another “Chromebook” logo on the extreme left tip. When you open the lid, you’re welcomed by a brushed white deck, white keys and speakers on both sides of the keyboard.

Sure, part of me worries that this machine will look dirty over time, especially given its target audience: kids and the k-12 niche. But the white surfaces are a refreshing approach away from the black or gray chassis typically found on budget notebooks.

HP offers an HD (1,366 X 768) resolution 14-inch display on the Chromebook 14a-na0021nr, which is what we’d expect on such a budget device. Sure, the 14-inch panel isn’t particularly bright or vivid, but looks good with thin bezels on the top and sides, especially when compared with competing Chromebooks.

When watching a live-trailer of Aladdin movie, you can see the ornate details in princess Jasmine’ drees. Also, details in some of the darker desert scenes are not easy to make out because of the dim panel. But all factors considered, the image quality is quite impressive.

Even without backlighting, the Chromebook 14’s keyboard is still great and comfortable to use. The white, chiclet-style keys are well spaced and large, apart from some undersized arrow keys. And while they only have 1.2 millimeters (short of our 1.5mm preference), individual keys feel bouncy, perhaps due to their above-average 71 grams of actuation force.

The Chromebook 14a-na0021nr has a 4.5 x 2.3-inch touchpad that responds fast to swipes across several Google Chrome tabs and you won’t have any issue pulling off some Chrome OS gestures, such as switching between tabs with a three-finger swipe.

In real-world use, you can load up to 9 web pages on Google Chrome, with two tabs playing HD YouTube videos while another pair streams video games on Twitch. If you try loading more tabs, chances are that some will get stuck on the spinning wheel for several minutes and the cursor will start to lag.

Since it runs the light-version of Google’s Chrome OS, it manages to deliver fast performance as compared to budget notebooks running Windows 10 OS. As such, with more casual web browsing usage, stuttering during use is rare, and on daily use you shouldn’t run into problems too often.

HP claims that the Chromebook 14 can last up to 13 hours on a single charge, but the much you’re getting is around 9 hours and 38 minutes over continuous use at 150 nits of brightness. That’s almost a day at work or school without the need of plugging the laptop into a power source. It edges out the Chromebook average (9:10) and crushes the Acer Chromebook 15 (9:07).

The new Chromebook 14 is a good choice for anyone looking for an inexpensive Chromebook that can do simple tasks, like browsing the web, sending email or watching online videos. Well, while. this Intel version offers more power than the underwhelming AMD model, its performance isn’t a match to similarly priced Windows laptops such as the Acer Aspire 5 (2021 model) or the smaller Asus L210MA-DB01 laptop. 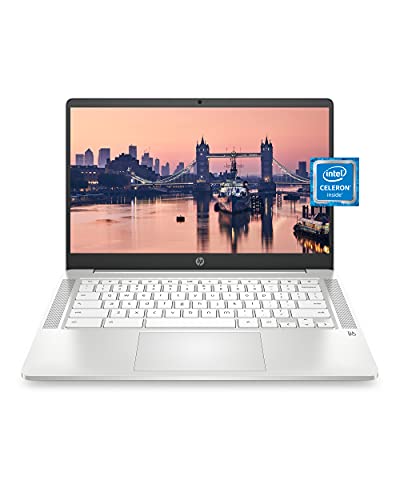 Still, with all-day battery life, an attractive design and a portable profile, you can’t do much better for less $300. All those make the HP Chromebook 14 14a-na0021nr a modest investment that’s actually fun to use despite its shortcomings.

HP unveils Pavilion Aero 13 – the company’s lightest laptop ever, and its AMD powered