The HP 15-AY103DX is a prime choice if you’re looking for a reliable, yet understated laptop for your startup, home office or college. It’s comfortable to type on all day, has exemplary power to handle most tasks thrown its way, it won’t break the bank.

Simple, durable and reliable. Is the ultimate definition of a laptop meant for a small business, sole proprietorship, media consumption or even college. The HP 15-AY103DX offers that, and does so with immense affordability and timeless design for the budget hunters.

The latest HP 15 looks to the 2016 iteration it replaces, though it’s what is inside that really counts. Afterall, bargain hunters aren’t always after looks and won’t be surprised by the AY103DX’s utilitarian looks.  It sports a matte-black chassis with decorative glossy stripes across the lid alongside a silvery ‘HP’ logo. It measures 0.9 by 15.1 by 10 inches (HWD) and weighs 4.7 pounds.

What the low-resolution means is that, with a closer look, you’re able to pick out the individual pixels, but that really doesn’t lock you out of a YouTube video or reading your mails.  Also on the screen is a glossy, reflective coating, which might compromise your work outside or under bright lighting, thereby, forcing you to fiddle around for a good viewing angle to avoid the excessive glare.

The large chassis makes room for a 10-key number pad, in addition to a full-size keyboard that’s relatively comfortable to type on. Still, key travel is rather too short for my liking, but otherwise they just work exactly as they’re supposed to. The same black plastic used to make the lid is the same one used to make the deck, only that it has a slight polish.

The deck and touchpad are bordered by a slight indentation, and were it not for two click buttons on the bottom, the touchpad would be invisible. This isn’t a problem per se, but you’re likely to find yourself unintentionally scrolling up into the space bar a couple of times. You have speakers on the bottom of the chassis, loud enough, but the quality isn’t pristine, which is common for budget laptops.

Port selection is pretty standard for a budget laptop. It comes with the latest version USB 3.1 port (supports data speeds of up to 10Gbps), two USB 2.0 ports, an HDMI port, a Headphone/Microphone jack, an Ethernet port, an SD card reader and a DVD/CD burner. You have 1TB of local storage on a 5400rpm hard drive (rather slow, but can be swapped with a snappier SSD) and a webcam in the top bezel.

For connectivity, the laptop comes with 802.11ac Wi-Fi, sadly, Bluetooth isn’t supported here which is quite an understatement even for a budget system. The laptop comes with Windows 10 Home and a fair amount of preinstalled bloatware, but can be uninstalled in a few minutes.

A seventh-generation Intel Core i5-7200U processor with Intel HD 620 drives the HP 15-AY103DX. It’s the successor to the Intel Core i5-6200U found in most budget desktop-replacement laptops from 2016, including the Acer Aspire E 15. As such, the HP 15 is just a bit faster than its predecessor the HP 15-ba009dx, thanks to the newer processor as well as doubled system memory. It’s also a bit quicker than other laptops like the ASUS F556UA-AB32, though the latter comes with better battery life and a Full HD screen.

The entry-level Intel HD 620 graphics card doesn’t translate into any gaming prowess, though, you’ll still be able to play a couple of older titles. If you’re considering a chromebook in the same league, the Acer Chromebook 15 gives you the ability to work offline and run programs like Microsoft Word and Excel, tough ample local storage points are reserved as strong points for traditional laptops. The Chromebook 15 does have a superior 1080p IPS screen, faster 802.11ac connectivity and almost all-day battery life.

The three-cell battery yielded 4 hours 37 minutes, on our battery rundown test –acceptable for a budget 15-inch laptop. While that doesn’t clear the 8-hour threshold for what we consider all-day battery life, it remains behind the Dell Inspiron 17 (5:20), Toshiba Chromebook 2 (5:32), and the Satellite C55DT (5:27). All these don’t come close to the Aspire One Cloudbook’s impressive 13:59, however.

The HP 15-AY103DX is a prime choice if you’re looking for a reliable, yet understated laptop for your startup, home office or college. It’s comfortable to type on all day, has exemplary power to handle most tasks thrown its way, it won’t break the bank. Its rivals from last year might cost less, but that price bump is justified by the addition of a touchscreen and a faster processor.

If you need a Chromebook, the Samsung Chromebook Plus  is a worthy alternative with good battery life and convertible touch screen. Though, you’ll miss the luxury of features such as MS Office and massive local storage. As such, the HP 15 remains a bargain deal that generally delivers on what it promises and gets the job done, and done well. 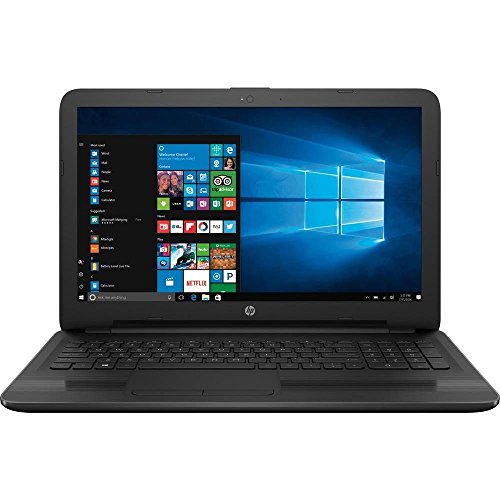