There’s simply a lot to like about the Eufy RoboVac G30 Edge. It runs quietly, it’s compact and the accompanying app is easy to use and offers lots of options, and is more affordable than competing robot vacuum cleaners.

If you’re looking for the best robot vacuums Roomba or Shark will often be at the top of your shortlist, but lately, Eufy’s products are becoming equally popular. Eufy’s line of robot vacuums has consistently been strong cleaners that perform nearly as well as their higher-priced competitors. The newest robot vacuum, the RoboVac G30 Edge, is yet another excellent, yet affordable product.

As with most robot vacuums, the RoboVac G30 Edge sports a distinct, and refined look like Eufy’s other robot vacuums: shiny plastic around the edges, blue accents on the dustbin ad blue strips up top. It has a radius of 12.8 inches (320mm) and stands 2.85 inches (70mm) high from the ground and doesn’t have any protruding sensors, meaning it can duck under relatively low furniture to clean underneath.

It also comes with a charging base station, which the RoboVac G30 Edge automatically returns to when it’s finished cleaning or needs charging, and is also supplied with four meters of magnetic tape, which you can stick to your floor to block off areas that you don’t want the robot to clean.

When you flip over the vac, you’ll find a small roller brush set between two rubberized wheels. The rubber and bristle combo roller on the RoboVac G30 Edge is identical to that on the RoboVac 30C and the 11s. The bristles are thick; you may have a hard time removing dog hair, unlike the Roborock S7 MaxV Ultra which empties and self-cleans after each use. There’s a tri-spoked spinning brush at the top left corner, alongside a path-tracking sensor that sits in the upper right corner.

Other accessories bundled into the package are a spare filter, a spare spinning corner/edging brush, a cleaning tool, and a package of cable ties to facilitate you tidy up any tangles of electrical wires that might tangle up your robot vacuum.

The charging block plugs into. A wall socket should be left at the edge of the room, with lots of space around it, so you can’t stash it away in a corner. The Eufy RoboVac G30 Edge is controlled through the EufyHome app, a universal mobile app for controlling all Eufy smart home devices. It’s simple compared with more expensive rivals but on the plus side, it makes the robot vacuum very easy to use.

For instance, to launch a cleanup, you simply tap the app’s “Clean” button, and the RoboVac sets off. You can control various parameters via the app, including the suction level, so you could have it operating for longer over a larger area by reducing the power used. You can as well send it back to its station for a charge or set up a simple schedule.

Also included is a spot clean option, which sets off the device in a spiral motion to clean a specific area. You just have to move the device to the area you want to be cleaned, which you can do via the remote-control function in the app. This feature is hidden away in the app’s Settings, and lets you move the device forward, or rotate left and right to change direction.

It also integrates well with most voice assistants, working fine with both Google Assistant and Alexa. However, the feature set is limited, all you can ask the robot is to start and stop cleaning, return to the charging station, and make a noise to help you locate it – but it is well nonetheless.

Finally, as with most robot vacuums, the dust collection bin isn’t particularly big – only 0.6-liter capacity – so you’ll need to empty it quite regularly. Luckily, this is easy enough to do and accessing the washable filter is pretty straightforward as well.

Unlike more expensive robot vacuums that use lasers and other technologies to map and navigate the cleaning area, the RoboVac G30 Edge is less precise. Still, it builds a map but does it on the fly, each time it cleans. It does this by sensing its immediate surroundings using infrared and gently bumping into obstacles as it cleans.

In doing that, it builds up a picture of the static objects around it, whether they are walls or furniture. It cleans in the regular back-and-forth patterns as it does this, cleaning empty spaces and remembering where it’s been and where it can’t get to.

Once it has cleaned as much as it can of one area, it moves on to find more spaces it hasn’t covered yet, with a focus on areas that aren’t already blocked by walls or other obstacles. Again, it isn’t as efficient as the Roborock S7 MaxV Ultra which uses a Lidar sensor and cameras to map and navigate around the house when vacuuming and mopping.

There’s no way to set virtual no-go zones via the Eufy app, which is something you can do with rival robot vacuums like the iRobot Roomba j7+ (7550). To keep it from cleaning certain areas, you have to apply the supplied tape to the floor.

Speed is a little middling, with the vac taking 25 minutes to clean a modest 12m2 room, with most of the time taken up backing in and out of tricky corners, before announcing it’s done cleaning and heading back to its charging dock. Eufy claims that the battery can keep the vacuum cleaning for up to 110 minutes between charges, which should be more than enough to complete cleaning a full floor of a modest house.

Eufy rates the suction on the RoboVac G30 Edge at 2,000Pa, which is as powerful as its robot vacuums can get. This is the same suction power as the RoboVac 15C Max but it’s significantly more than the 1,500Pa suction of the RoboVac 30C. The first impression is that the G30 Edge is indeed a quiet cleaner. You can hold a conversation at normal volume the entire time it’s running, which is a big step from the Neato D4 and the unpleasantly loud iRobot Roomba s9.

Watching the RoboVac G30 Edge clean confirms that Eufy has done its homework well; the sporadic cleaning patterns of previous models such as the RoboVac 11s and 30C have given way to an orderly back-and-forth pattern. It’s now more reminiscent of higher-end robots like the iRobot Roomba s9, but while we appreciate the methodical cleaning approach, you’ll notice that it seems to clean a few areas with more gusto than others.

While we greatly appreciate the Eufy G30 Edge’s quiet cleaning approach, we just wish its performance was better. The G30 Edge is a middling cleaner, earning an overall pick-up average of 87.92%, which is lower than both the Shark Ion R85 and the more affordable iLife V3s Pro. However, it still beats its sibling, the RoboVac 30C, and the Neato D4, albeit so slightly.

If your home is primarily hardwood floors and cat free, you’ll find the Eufy RoboVac G30 Edge very handy, as it picks debris and other dirt with excellent precision. What’s more impressive, it doesn’t crush or pulverize cereals as it vacuums, meaning it won’t create a mess that will take longer to clear. Also, its performance with pet hair on bare floors is impressive, especially on hardwood, though a fair amount of hair gets wrapped around the roller brush. Even still, it picks up more than competing robot vacuums.

Also, as we’ve noted in reviews of other Eufy range of robots, the 145mm-wide suction sits between the wheels, which means cleaning close to the edges of your room is left to a single rotary brush. While this will flick some of the dirt from the edge of a room into the vacuum, but it also means that you’ll have to go around the edges with a handheld if you want a thorough clean.

Should I buy the Eufy RoboVac G30 Edge?

There’s simply a lot to like about the Eufy RoboVac G30 Edge. It runs quietly, it’s compact and the accompanying app is easy to use and offers lots of options. As priced, the G30 Edge is cheaper, quieter, and more attractive than even more expensive robot vacs such as the Neato D4, but it lacks the latter’s ability to create virtual no-go zones and excellent edge cleaning. 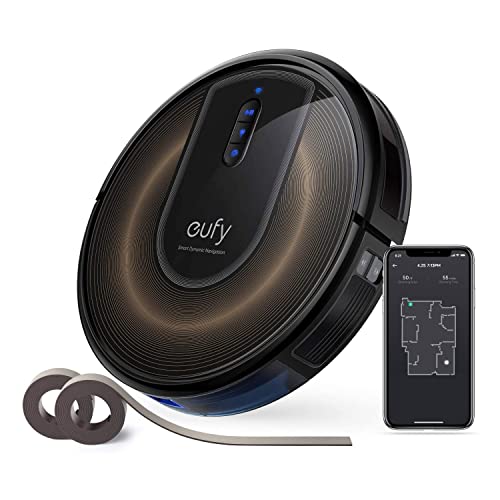 Still, the G30 Edge adds basic mapping and a slew of other useful extras, but not superior to the Shark Ion R85, which is our Editors’ Choice for cheap robot vacuums. That said, the Eufy RoboVac G30 Edge is fun to use – which is not something we often say about the whole idea of vacuuming.