The CyberpowerPC Gamer Supreme SLC8260A5 is a solid pick for a mainstream gaming PC, that’s widely configurable, with AMD and Intel CPU flavors, and RGB lighting at a popular price.

We’ve reviewed CyberpowerPC’s last mid-tower gaming desktop, the CyberpowerPC Gamer SLC8260A3, at the end of 2020. Now, well into 2021, they CyberpowerPC is back with a refreshed CyberpowerPC Gamer Supreme SLC8260A5. Its AMD Ryzen 7 3800X processor and up to 12GB Nvidia GeForce RTX 3060 GPU make a superb combo for the latest games and esports, and its all rounded out by a pretty design with RGB lighting.

Where it really does well, though, is pricing, coming in several hundred dollars less than the competition, with equivalent (or even better) hardware. It’s a great mainstream mid-tower gaming desktop.

The Gamer Supreme SLC8260A5 accomplishes one thing right off the box: much like its predecessor, it looks in every angle like a gaming desktop. This is good news in the mainstream market, where lots of gaming towers tend to look rather samey. At least, this one is unique.

The front panel has a trio of RGB LED circles, and a CyberPowerPC logo at the bottom. The clear tempered glass on the front panels adds a little flair, too.

The outside panels are sturdy metal, and the transparent side panel is glass too. Being tempered glass, it’s very clear, and provides a good view of the interior thanks to the Gamer SLC8260A5’s LED case lighting.

Unlike the Lenovo Legion Tower 5i with static fan LEDs, the CyberpowerPC Gamer SLC8260A5 has customizable rear exhaust, front and processor fans supporting RGB lighting, with the option of static color or among preset patterns such as color styling. There’s no shortage of brightness, and the lighting is smartly implemented.

The blacked-out metal on the inside looks much better than the usual bare steel often found on budget mainstream towers. Once again, the wiring is tidy and slick as it should be in a handcrafted tower from an aftermarket specialist, and we’re glad nothing is haphazardly tied off.

The CyberpowerPC Gamer Supreme’s connectivity is standard for a desktop of its size. The front is limited to two USB 3.1 Gen 1 Type-A ports (supporting 5Gbps transfers) and an audio combo jack (headphone and microphone in one).

As these ports are located on the top panel, you might have wires flowing from there should you decide to put the tower on top of a desk.

We’d love to see a media card reader, sadly this tower doesn’t have one. They are just becoming are on desktops, even major manufacturers like HP and Acer are dropping them.

The rear panel has another four USB-A ports, two retro USB 2.0 ports, Ethernet, and a trio of audio jacks: line in, line out, and microphone.

For the price, it’s a pretty good deal for these components compared to the HP Omen 25L, which costs a few hundred dollars more with just a 6GB GeForce RTX 2060 Super, and even the Dell G5 Gaming desktop with a Core i7-10700K processor is still more expensive. Similarly, co-boutique builders like SkyTech Shadow 3.0 are slightly expensive, ringing a Ryzen 7 3700X chip and RTX 3060 with 12GB and 1TB SSD for storage.

While the AMD Ryzen 7 isn’t as quite as potentially on paper as the flagship Ryzen 9 5950X (a little bit expensive), it’s still a very powerful 8-core CPU. And paired with Nvidia’s RTX 3060, along with 16GB of RAM and a fast PCIe SSD, the Supreme Liquid Cool Gaming PC is just as potent in productivity and workstation tasks as it is playing games.

With AMD’s 8-core Ryzen 7 and Nvidia’s RTX 3060 running the gaming show inside the CyberpowerPC SLC8260A5 – and liquid cooled – we expect the rig to spit out impressive frame rates. As specced, we don’t expect it to walk away from the impressive competition, given that most of the systems it competes with are much larger.

On Far Cry New Dawn, it leverages the MSI Aegis but pulls ahead at 1080p by 11 fps, scoring 108 fps, which drops to 65 fps in 4K. In Borderlands 3 (high settings) at the same resolution, it scores 117 fps, which is quite impressive. And at 4K, the CyberpowerPC Gamer’s 39 fps is once again a few frames behind the MSI and Alienware systems with similar graphics cards.

If you’re looking for the latest and greatest midrange gaming PC, the CyberpowerPC Gamer PC delivers you the most recent (not the most powerful in the series, though) parts from AMD and Nvidia, at least for as long as it’s in stock. 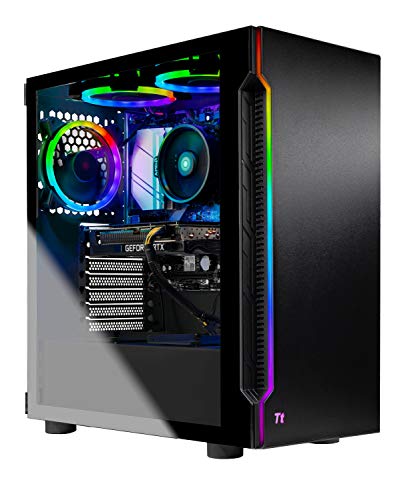 AMD’s Ryzen 7 and the Nvidia GeForce RTX 3060 in our review configuration work potently together. In productivity, the Ryzen 7’s expansive core count do stand up to some competition, which makes some workloads run faster. All CyberpowerPC needs to do is throw in a media card reader and a USB-C port.

As a whole package, the CyberpowerPC Gamer Supreme SLC8260A5 is a powerful gaming rig with few frills. If you need a PC to play modern games, this will stand up, sometimes even in 4K with the right settings.