The CYBERPOWERPC Gamer Master GMA1390A2 is an attractive and powerful alternative from having to build your own gaming rig bottom up, but it’s not a PC without its own tradeoffs.

Amidst the rollercoaster of gaming consoles, video games still reign supreme. You can get playing on pretty anything, a $400 smartphone, a notebook or even an entry level Chromebook. Yet, the status quo remains between basic games and the core-gamers’ hardware-sipping titles. For sure, you’re not going to play Sekiro: Shadows Die Twice at 1080p and maximum detail on a flagship smartphone.

If that’s your poison, you’ll definitely need a serious battlestation – like CyberPowerPC’s Gamer Master. This full-size tower desktop is massive on both size and power, but lightweight in pricing. It stands 18.7 inches tall, weights at least 31 pounds, but starts south of $1,000. The full equipment we’re reviewing, the ¬Gamer Master GMA1390A2, features AMD’s Ryzen 7 2700 CPU, 8GB of RAM, a GeForce GTX 1050Ti GPU and a 480GB solid state drive, and rings up.

That’s a good price for the hardware, though not unusual for an entry-level gaming desktop. And as it turns out, the Master is money well spent. 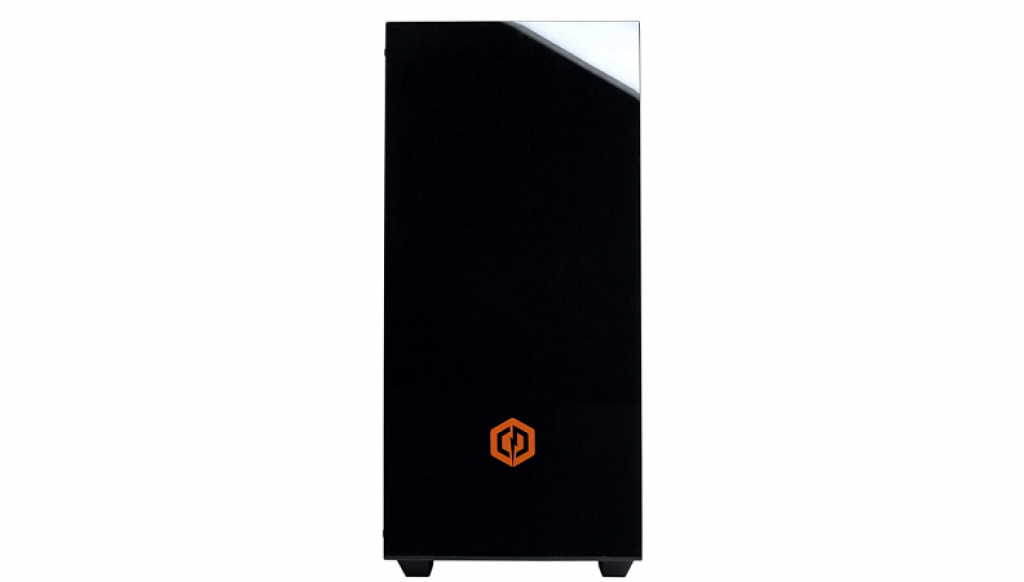 The Gamer Master GMA1390A2 uses the same standard tower case as its siblings from this year (of course with a few tweaks), and I’m a big fan. It stands at 18.7 by 8.2 by 18.5 inches (HWD), all black brushed aluminum. The front panel is solid black cover with a CyberPowerPC logo on the lower flank, a move away from the three concentric circles in its predecessor from last year.

For size comparison, the iBUYPOWER Trace 9220 stands 19.4 inches tall, 8.4 inches wide, and 19.7 inches deep, taking up much more space. CyberpowerPC, just like other boutique manufacturers, sometimes go overboard on the bling, but here the design is rather restrained, and I can say –elegant.

The Gamer Master doesn’t have an optical drive, which is fine given that these days you occasionally need to play from DVDs, as most PC games can be downloaded from digital services like Steam and Origin. Plus, having one on the front would be a scratch on the case’s stylish austerity. As it is, there are easy-access ports on the top panel (towards the front): two USB 3.1, microphone and headphone, and a Reset button.

On the back, you have a plethora of ports for all your components, including: two USB 2.0, four USB 3.1, one RJ-45 Network Ethernet, and Audio 7.1 channel. The Nvidia GeForce GTX 1050 Ti graphics card also includes one HDMI, DisplayPort 1.4, alongside a DVI connector for dual-monitor setups.

Also bundled into the package is an RGB 7 Colors gaming keyboard and mouse, alongside 802.11AC Wi-Fi for wireless connectivity. 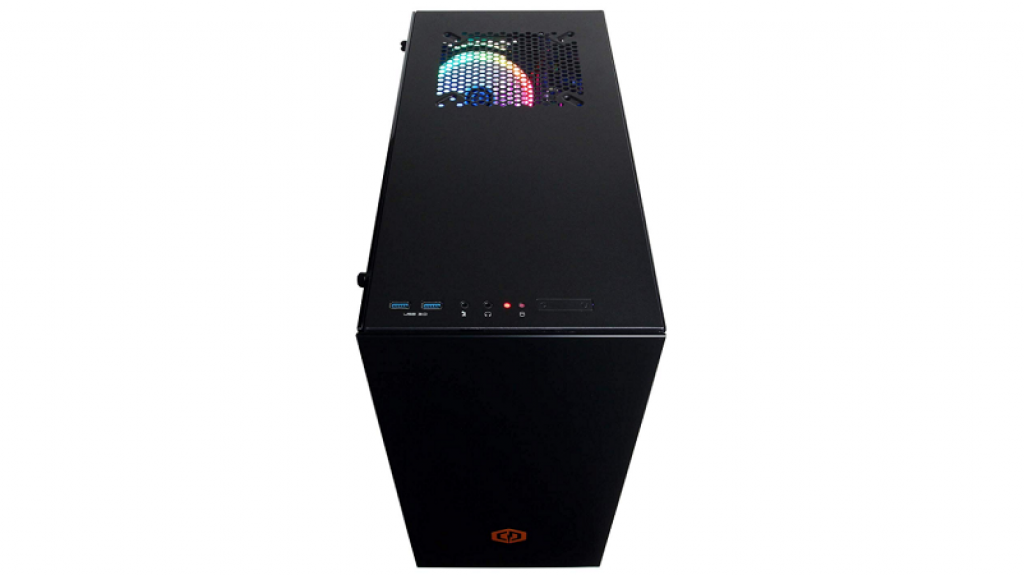 As for the components packed inside, it’s very easy to see why this gaming desktop is taking competition to the next level. The hallmark component here is the 8-core 3.2GHz Ryzen 7 2700 CPU, AMD’s flagship processor designed for pro users who needs more muscle than anything in a desktop PC.

The Ryzen 2 2700 is based on the AMD B450 Chipset, effectively rivaling Intel’s hexa-core Core-i7-8700K processors, backed by snappy performance per core that’s sure to turn some heads. It is an eight-core, 16-thread CPU capable of boosting to up to 4.1Ghz, a feature AMD bills to be the ‘best thing’ to happen in gaming.

In fact, it is not only beneficial for gaming, but also for professional creatives and multi-taskers who sometimes need to stream content side-by-side with CPU-intensive applications. To keep it running, the CYBERPOWERPC Gamer GMA1390A2 is fitted with a closed-loop liquid cooler that can be seen as a nifty clear cover over the CPU heat sink. 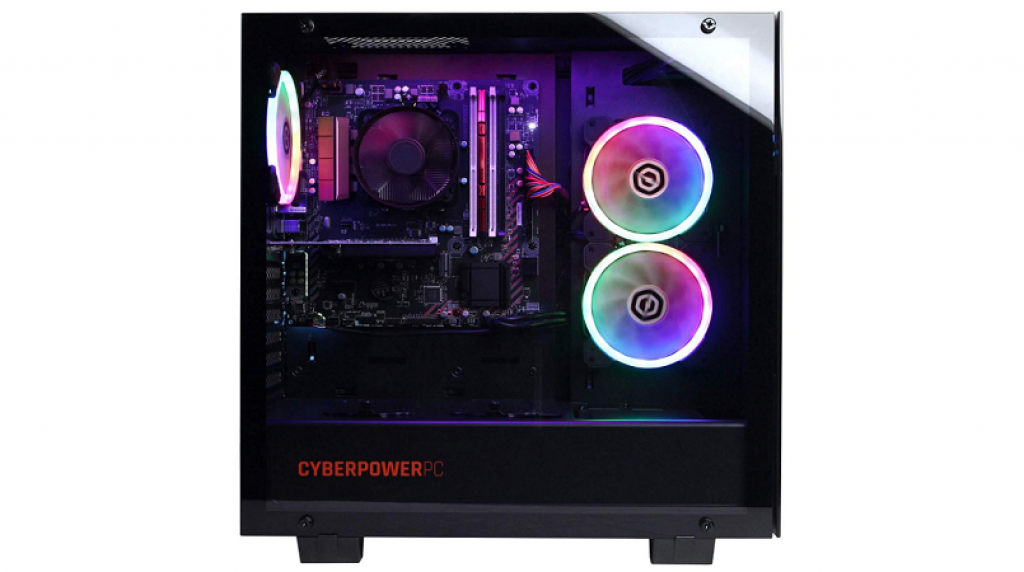 For a budget gaming PC, the dedicated Nvidia GeForce GTX 1050 Ti (4GB) excels as expected. This graphics card isn’t at the top of Intel’s chip offering, in fact it doesn’t even meet the threshold for VR gaming (GTX 1060 and above required), but it does a nice job as it was meant to.

It supports smooth playability on modern titles at 1080p resolutions, averaging 69 FPS on Titanfall 2, 68 FPS on Battlefield 1 and 47 FPS on Fallout 4. This is roughly the same (if not better) scores we’ve got on competing systems outfitted with the same graphics card.

As far as comparisons to midrange systems go, this machine has a lot to offer both on cost saving and reliable performance. It compares with the likes of the SkyTech Shadow and Acer’s Nitro 50 N50-600-UR15 that are well within the same price. Still, the Gamer master stands out for its design and inclusion of a 480SSD as the only storage option and robust connectivity.

The CYBERPOWERPC Gamer Master GMA1390A2 is an attractive and powerful alternative from having to build your own gaming rig bottom up, but it’s not a PC without its own tradeoffs. While the Master ships with one of AMD’s latest processors in the market, the Nvidia GeForce GTX 1050 Ti graphics card is a bit dated. It is a compromise that was likely made to tame the costs, but enthusiasts may be deterred by the lack of a more premium configuration that includes VR support – at least a GTX 1060 GPU.

As configured, the CYBERPOWERPC GMA1390A2 is a competitively priced entry-level gaming PC. Although the Master costs a few dollars more than both the CYBERPOWERPC Gamer Xtreme VR GXiVR8060A6 and the iBUYPOWER Elite Slate2 080i. CyberPowerPC’s gaming strategy with the Gamer Master is to focus on the processor, so the company went with an older graphics card to keep costs down.

Both the Gamer Xtreme GXiVR8060A6 and Elite Slate2 080i, on the other hand, come with a newer 9th-generation processor – Intel Core i5-9400F 2.9GHz, and a slightly better Nvidia GeForce GTX 1060 GPU, and well-rounded storage options. For the prices both of these rigs ring, you’re getting much better performance.

No. Without investing the work in building your own gaming rig from scratch, you’re relying on the choices that CyberPowerPC made. Its newer sibling, the CYBERPOWERPC Gamer Xtreme VR GXiVR8060A6 costs a few dollars less, but hosts a 9th-generation CPU, a better graphics card and support Virtual Reality (VR) headsets.

With the newer Gamer Xtreme, you’re getting a handsomely designed, liquid-cooled system that packs ample performance to get you started. It remains our Editors’ Choice for budget gaming PCs. 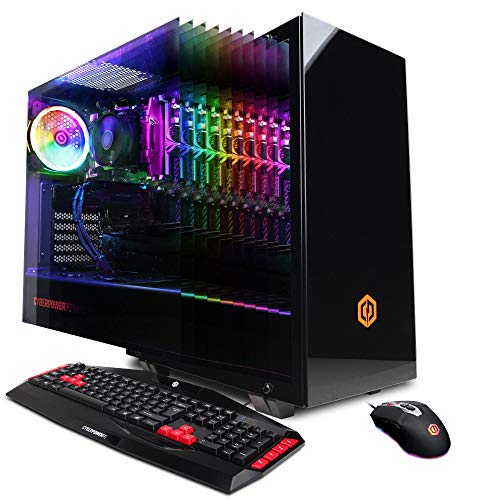