The CyberPowerPC Gamer GXiVR8100A is a lesson in budget PC gaming, providing very good gaming performance for less money. It comes with some recent components to help it cruise through the latest games, and it even support Virtual Reality (VR) headsets like the Oculus and HTC Vive. Last year’s model of the Gamer Xtreme was let down by the lack of a solid state drive, something that has been corrected by the inclusion of a 120GB SSD over the existing 1TB hard drive.

The design remains unchanged from its predecessor, but much has been done on the inside to boost performance. But, rocking an Intel 8th generation Coffee Lake CPU and Nvidia’s GeForce GTX 1070 as part of the high-end configuration option, you’re getting one of the best gaming PCs you can buy in 2018, but without spending too much.

Since the Gamer GXiVR8100A is a gaming computer, the outward appearance and components inside are key elements. While anyone can slap together high-end parts and call it a gaming rig, they can’t do it perfectly. CyberPowerPC has done this computer perfectly. It is evidence of how far tower gaming machines have come over the years, with some like the MSI Vortex G25 8RE becoming incredibly compact.

The Gamer Xtreme VR GXiVR8100A is housed in a standard tower, measuring 17.9-by-7.9-by 18.5 inches (HWD) and weighs 27.1 pounds. It isn’t the most portable PC around, especially if you will be moving it from one room to the other, but as designed, it is meant to stay in one place. The design doesn’t bring anything new into the boutique-built gaming PC category, as we’ve seen SkyTech and CyberPowerPC go head-on with LEDs.

The side and front panels are made of tinted tempered glass that give you a clear view of the interior components, and it looks vibrant with the red LED illuminations, both from the inside and outside. The front panel, for example, has a trio of circles underlain by rhythmic red LEDs, while glass door on the left side gives a clear view of the interiors including the cooling fans, disk bays and motherboard silhouetted by the red color theme. 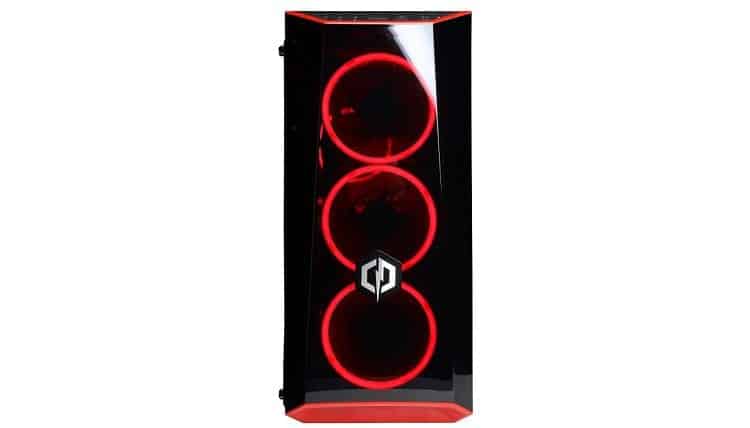 To connect your VR headset and other peripherals, there is a varied collection of I/O ports. On the front upper deck, there are easy access ports: two USB 3.0, a reset button, a Power ON/OFF button, microphone and headphone jack. Around the back, there are more ports including: four USB 3.1, audio inputs, Ethernet port and two USB 2.0 ports (for use with the included wired gaming mouse and keyboard).

On the graphics card, there is a DVI, HDMI and DisplayPort for connecting to external displays, or connecting to VR headsets. An included 802.11AC Wi-Fi adapter lets you access wireless networks.

CyberPowerPC did not include an optical drive here, and you honestly don’t need one when you can download all your favorite PC games from online services like Steam and Origin. But in the same spirit of skipping some features, CyberPowerPC went ahead and opted not to include a USB Type-C port, which could have been handy for connecting to the latest VR headsets. Better still, the USB-C provide the option for a DisplayPort connection, meaning it would be nicer to have that option to eliminate the need for extra cables. 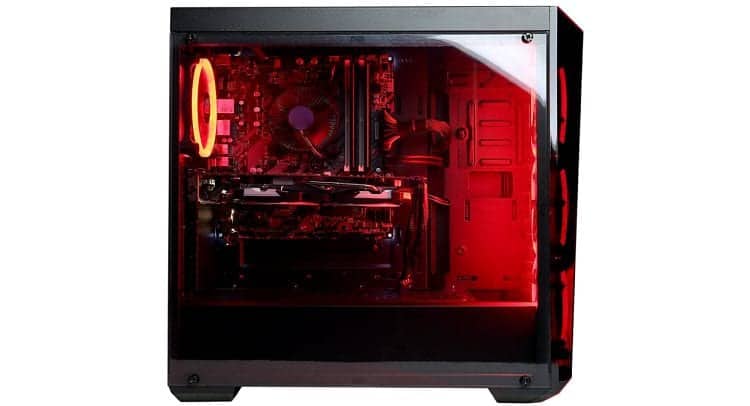 All systems in the Gamer Xtreme Series already come with components to put performance in their favor, but the Coffee Lake upgrade in the CYBERPOWERPC Gamer GXiVR8100A puts the gaming PC on a whole new formation of power. It features a 3.7Ghz intel Core i7-8700K (6-core) processor, 16GB memory and 120GB SSD + 1TB hard drive for storage. This configuration combined with Nvidia’s GeForce GTX 1060 (3GB) graphic card translate in a system with peppy performance for both games and professional productivity tasks.

With two more processor cores in tow, the latest Gamer GXiVR8100A gets spirited performance over last year’s model. On productivity tasks like video encoding alone, we are now seeing double the amount of CPU performance. This in turn leads to faster completion of projects and muscle to multitask in a busy digital environment. That said, the gamer’s K processor unlocks its overclocking potential. The HP OMEN 880 and the iBUYPOWER Slate AM8450i, both featuring the Intel Core i7-8700K achieve similar multi-core performance scores.

Outside productivity tasks, the CyberPowerPC flagship desktop packs enough muscle to power and drive a virtual reality headset. Thanks to the Nvidia GeForce GTX 1070 (8GB VRAM) graphics card, you can play modern games at full resolution on a 3,440 x 1,440 ultra-wide screen monitor and even high-to-Ultra settings.  Modern titles like Overwatch and Vermintide II stay stable even at High settings, yielding full playable 42 fps.

The CyberPowerPC Gamer Xtreme VR GXiVR8100A is a high-performance gaming desktop that can clobber any gaming console while supporting virtual reality headsets. That’s no small accomplishment, especially for a system that is light on your wallet. For anyone that want a super affordable, but potent gaming PC though, it may be worth it.

Gaming computers with similar specs from mainstream brands like HP and Dell have more pathways in being popular in the market, but they tend to cost almost double yet deliver the same (or less) performance. What type of gaming desktop fits for you will determine whether you’re in it for the brand or performance. For enthusiast gamers, the CyberpowerPC Gamer Xtreme GXiVR8060A7 is also worth a look as you shop around.

After all, CyberPowerPC is a brand that has cut its niche in the desktop PC gaming category as a reliable manufacturer of affordable, powerful gaming desktop PCs. And, if you’re in the headway for VR gaming for much less, the CYBERPOWERPC Gamer GXiVR8100A is perfectly a good pick.