The Brother HL-L2340DW is a perfect candidate for anyone in the market for a shared printer to be used in a micro office or in need of a personal monochrome laser printer that can be used in any office. It has a lot going for it, including mobile printing support, acceptable paper handling, printing speeds that are close to its Samsung competitors, and is rather inexpensive.

A printer small enough for personal home-office use, but a perfect candidate for sharing in a micro office. That’s the Brother HL-L2340DW compact laser printer.  If you’re in the market for a small printer that offers acceptable speed and paper handling for basic printing needs, then the Brother HL-L2340DW is hard to pass by. It comes with extras such as mobile printing and Wi-Fi Direct, all of which will keep most of us happy.

Just like most budget printers, it comes with a few rough edges here and there, but it does deliver where it matters. For instance, the lack of Ethernet connectivity is a glaring omission, in an otherwise superb printer, but if you can do with network connectivity via Wi-Fi, it’s well worth a long look as you shop around.

In a micro-office, space matters, and the HL-L2340DW fits into such office setup thanks to its small size and weight. It measures 7.2 by 14 by 14.2 inches (HWD) and weighs only 15 pounds, meaning that it can fit on your desk without taking up much space. The low weight profile makes it portable for one person to move easily into place. All these make it a pinch smaller that the Samsung M2825DW and even the new crop of Samsung printers —the Samsung Xpress M2835DW.

Here is one thing I always look out for in every printer, of course, before committing the dollar. The HL-L2340DW scores well in paper handling. Its paper handling matches our Editors’ Choice for micro-office monochrome laser printer, the Samsung Xpress M2825DW with both having a 250-sheet tray, a one-sheet manual feed, and a built-in duplexer that facilitates two-sided printing. It suffices as the ideal printer for most personal or micro-office use. If your printing needs are something above basic, you’ll have to look elsewhere, since Brother doesn’t have any paper handling upgrades for the laser printer.

Setting up the HL-L2340DW was pretty straight-forward in our tests. I was able to connect it to a Windows 10 system seamless, since the setup is typically standard for any USB-connected monochrome laser.

The HL-L2340DW’s printer engine is rated at 27 pages per minute (ppm) by Brother, which is ideally the speed you’d expect when printing text documents or any type of files that need little to no processing. However, expect faster ppm from the Samsung M2835DW, although not far much apart.

Graphics quality isn’t any better, either, it falls ways below what the competition delivers. Though for a small business, its good enough, but only a select few would want to use it as its only good enough for PowerPoint handouts and the like. Its photo quality is typical for a monochrome laser, though the competition offers better. If all you need is to print recognizable images from webpages, and doesn’t have the need for demanding tasks, then it’s an acceptable choice.

Beyond the basics, the HL-L2340DW offers mobile printing, which is quite standard nowadays for printers in this category. If connected to your network, it will let you print seamlessly through the cloud and print from an iOS, Android tablet or smartphone through your network’s access point. If you connect it to a single PC via USB cable instead, you won’t be able to print through the cloud, but the built-in Wi-Fi Direct will still let you connect directly to the printer from mobile devices—a feature that can be highly useful even for a personal printer.

The Brother HL-L2340DW compact laser printer is a perfect candidate for anyone I the market for a laser monochrome for personal use, that can also be used in a micro-office. It has a lot going for it, including mobile printing support, acceptable paper handling, printing speeds that are close to its Samsung competitors, and is rather inexpensive. For an otherwise superb printer, the lack of an Ethernet connection is something we can’t take lightly as it limits sharing and printing. 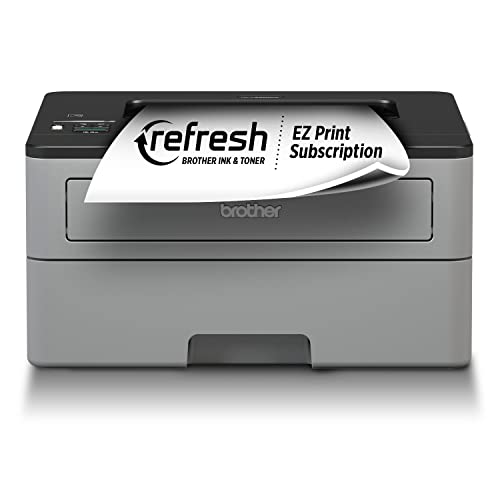 However, if you don’t need a wired connection to a network, and you care more about cost than output quality, it may be the printer you want. That said, if you need better-looking output or an Ethernet connector, you should consider the Samsung M2825DW or the Samsung M2835DW.