The BenQ MOBIUZ EX3210U has its crosshairs on being the best gaming monitor out there, and while you’ll spend a fortune for it, this piece of equipment boasts class-leading gaming specs and design to stand out in the crowded gaming monitors market.

While Benq advertises the MOBIUZ EX3210U as a gaming monitor, it ranks highly as a productivity monitor too, making it a big deal for creative professionals looking for the best 4K monitor that can be used for gaming on the side. If you’re in the market for a wide-screen monitor that’s fluent in both gaming and productivity, the EX3210U is an impressive all-rounder.

In recent days, 4K gaming has enjoyed tremendous popularity majorly due to inexpensive consoles and lots of displays – both televisions and monitors. With the MOBIUZ EX3210U has done a good job in delivering an excellent 32-inch IPS panel with 144Hz, Adaptive-Sync, HDR, and extended color among other exciting features. It isn’t a perfect monitor, but it checks most boxes for those looking for a monitor for gaming and creative tasks.

Setting up the BenQ MOBIUZ EX3210U is pretty straight-forward, and you can do it in a matter of minutes without an extra hand to help: the stand affixes into the base, the screen clicks into the stand, then connect the power cable and you’re done. With everything assembled, you just have to adjust the display height, you can tilt it up and down, and swivel it side to side – but you can’t rotate it into portrait mode, for example.

On looks, the MOBIUZ EX3210U is one of the most beautiful monitors we’ve seen – the only other monitor we’ve seen is the spectacular Alienware AW3423DW with its lunar light theme. It sports a white-grey finish with some dark accents here and there and four RGB lighting strips that you can customize to breathe whatever colors you like. All that is on the back of the monitor. The part facing you doesn’t look that impressive, just standard black bezels and a red accent on the base to break the otherwise plain look.

When looked at from the side, the relatively slim panel isn’t filled with USB or audio ports. However, there are plenty of connectivity ports on the bottom center jack with two HDMI 2.1, one DisplayPort 1.4, and four USB 3.0 ports. A USB-C port would’ve been much welcome here, but we’re happy to see the latest HDMI 2.1 standard here.

In case you want to use headphones or powered speakers, the monitor also features a 3.5mm analog jack. The downward-facing ports are a bit tedious when connecting cables, but they’re at par with what you’d expect for a monitor in this class.

Also included in the box are HDMI and DisplayPort cables (not very common), as well as a fancy remote control that makes it easier to switch inputs and adjust the volume – a very convenient approach that using a joystick and buttons under the bottom edge of the screen to navigate the on-screen menus.

A deep dive into the BenQ MOBIUZ EX3210U’s specs and you realize this is a monitor that will impress most folks beyond just gaming. This 32-inch IPS monitor rocks a 4K (3840 x 2160) resolution, a maximum refresh rate of 144Hz (via DisplayPort) or 120Hz (via HDMI), a 1000:1 native contrast level, a 2ms grey-to-grey response time, a typical brightness of 300 nits and a maximum peak brightness of 600 nits with HDR.

To that impressive profile, BenQ adds in 98% P3 coverage and 99% AdobeRGB coverage, with support for variable refresh rate (VRR), AMD FreeSync, and Nvidia G-Sync, and you have a great overall package. As expected of such top-tier specs, the monitor delivers great performance on both games and productivity, and while the display’s brightness and color accuracy are just good and not class-leading, it makes up with rich colors and buttery smooth motion that you’ll be hard-pressed to find anywhere else.

In addition to superb gaming performance, the integrated 2.1 speakers with a 5W subwoofer on the MOBIUZ EX3210U are more than enough for watching movies and games. In case you need to expand your sound output, there’s a 3.5mm headphone jack, it also gets an integrated microphone so you can do away with a headset completely. Interestingly, it has a choice of HDR and color modes to shuffle between, so if you’re running something specific then you can adjust the monitor’s output accordingly.

Once again, the MOBIUZ EX3210U’s main card is its color. It delivers a tremendous gamut, and that shows instantly you boot up Windows. Even the desktop background picture pops with a new dimension with rich hues throughout. No color is superior over the other, but an excellent balance means that you’ll be looking at more color than was encoded into the original SDR content, it comes out completely natural on this monitor.

In real-world gaming, titles like Call of Duty WWII take advantage of the MOBIUZ EX3210U’s capabilities to make some magical appearances throughout the game, with the metal and stone surfaces popping with fine detail. Similarly, the newly added horde mode on Doom Eternal looks great in all scenes, and the monitor’s refresh rate easily keeps up with the frantic action.

If you have a strong driver, maybe a PC with an RTX 3080, you can see over 130 fps, and coupled with excellent video processing, the monitor is sweetly smooth and responsive. Perhaps my only complaint here is that this monitor is more aggressive at cutting light output than all other BenQ monitors I’ve reviewed. While this results in smoother motion, a little more light would go a long way in making the gaming experience more immersive. Also, I just wish BenQ would include an adjustable pulse width for its backlight strobe, just like Samsung did with the Odyssey G9 gaming monitor.

Given what the BenQ MOBIUZ EX3210U offers in terms of picture quality and gaming features, I would choose it over a faster screen simply based on its fantastic color and excellent HDR. Of course, pro gamers with higher demands might hold a different opinion, but the sharp and saturated image is addictive and sufficient for casual play.

In certain areas, the BenQ MOBIUZ EX3210U can be beaten by other screens, but when you take it as an entire package across all the important metrics, it stands up much better value against its closest competitors.

Should I buy the BenQ MOBIUZ EX3210U?

Yes, the BenQ MOBIUZ EX3210U has a sleek design and a great monitor for gaming and work, making it a decent investment for both worlds.

Considering that 4K computer monitors are still premium purchases, we’re glad that they now cost far less than they used to. And with the proliferation of PCs with powerful graphics cards and gaming consoles, this class of monitors is clearly in demand. Unless you’re looking for the very best monitor with a super-high frame rate, a 144Hz 4K screen is a stellar display for both work and play.

Now packing extras like HDR, gaming monitors deliver better image quality than ever, and if you’ve followed the trends, you know that not all monitors do HDR well. BenQ has always held the upper hand on this front with its other gaming monitors, but the MOBIUZ EX3210U represents a new level of quality altogether. Thanks to its edge-zone-dimming backlight, this monitor ups the HDR game for BenQ in a big way.

From experience, I’ve always liked BenQ’s video processing. The ability to run Blur Reduction and Adaptive-Sync simultaneously is a major winning point that few other brands can pull. My only issue is that the EX3210U doesn’t include a pulse width adjuster. That could help users find a balance between smoothness and light output. 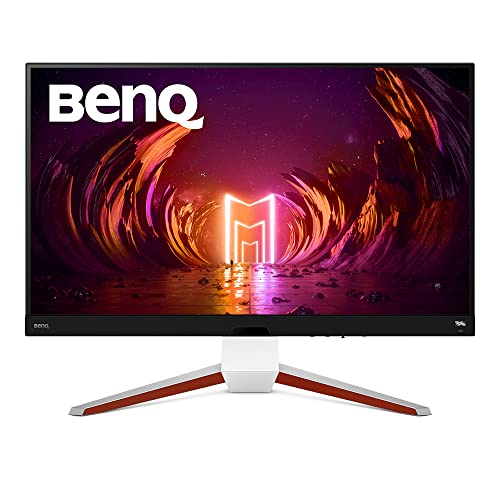 The main highlight here is color. The BenQ EX3210U offers one of the largest color gamuts you’d find outside of a very expensive professional display. With over 116% coverage of DCI-P3 and 84% coverage of Rec.2020, you might never need more vibrance. Thanks to its perfect handling of color balance, all content, SDR, and HDR, look gorgeous. I just wish it had a bit more SDR contrast, but HDR is simply stellar.

For the price, the BenQ MOBIUZ EX3210U is not cheap, but it delivers a lot of bang for the buck. You’ll be hard-pressed to find better images or video processing without spending hundreds of dollars more. It offers a thrilling gaming experience for PC and console alike, making it highly recommended.