The BenQ EW277HDR is not only a member of BenQ’s range of affordable big-screen monitors, but also one that brings new features into the desktop monitors category. This 27-inch monitor uses Vertical Alignment (VA) panel technology to bring High dynamic range (HDR) technology into monitors –something that has always been a preserve of high-end televisions.

While it won’t deliver the exact HDR TV experience, it does utilize BenQ’s Brightness Enhancement technology as a boost to the HDR feature, thus, increasing overall luminance by a bigger margin. It lacks more advanced features like FreeSync technology and a curved screen, but on a feature-price basis, it sounds like a solid choice for anyone in the market for watching movies, casual gaming or basic photo editing.

The 27-inch VA panel is housed in a black bezel-free cabinet, with a gray trim on its bottom edge that gives it a pinch of class. Supporting the cabinet is a stand with a rectangular base, which only provides only 20 degrees of tilt, and nothing else. It doesn’t get heist, swivel or pivot adjustability, quite mean, but ok for a budget monitor. Also, it lacks VESA mounting holes, meaning you can’t pin it to a wall, especially in a kitchen or shop setup. On the bottom edge are six standard buttons for the usual interaction, including powering on the panel and accessing the on-screen menu system.

A notable addition here is the HDR button that enables HDR mode. As configured, the monitor switches to HDR mode once it detects true HDR content; sometimes you need to view standard (non-HDR) content, of which the button comes handy. The button also enables B.I+ (Brightness Intelligence Plus technology) mode, which automatically adjusts the screen’s brightness and color temperature levels based on the current lighting environment.

For connectivity, the panel has a pair of HDMI 2.0 inputs, a VGA input, a headphone jack and an audio jack, all at the back. While the I/O selection is quite useful, I expected to see a DisplayPort input, or even USB connectivity. The ViewSonic XG2700-4K has a good collection of inputs, including, one HDMI 2.0, two HDMI/MHL inputs, a DisplayPort, a Mini Display Port, a USB 3.0 upstream port, two USB 3.0 ports and an additional USB 3.0 downstream ports. Lately, we’re seeing monitors with USB Type-C ports, including the 27-inch LG 27UD88-W and the Dell S2718D, but in the midrange category.

Having HDR technology on a monitor affords users the luxury of higher contrasts (brighter whites and darker blacks) and a wider color gamut. As a result, the panel delivers sharper, detailed images; as well as, detailed and more vivid colors. However, the experience s even better if you have a source device that can deliver HDR content, preferably the current Nvidia or AMD graphics card, or even the latest Apple TV or Google Chromecast Ultra.

Watching 12 Strong trailer using PC equipped with NVidia GTX 1070, the EW277HDR displayed sharper image, with better quality than what I noticed watching the same trailer in Standard (non-HDR) mode. The shadows had better detail; colors looked livelier, though the differences were not much apart. Overall, the difference between watching the same content on HDR mode and Standard mode was negligible, but since they cost around the same, sometimes an additional feature is better.

Even though it isn’t billed as a gaming monitor, it can still be used for casual gaming, since the 4-milisecond pixel response is solid for most modern games. Power consumption is 22 watts, which is fine, considering most of its competitors consume upwards of 28 watts. In ECO mode, the panel consumes 14 watts, though picture quality is dimmed as well. 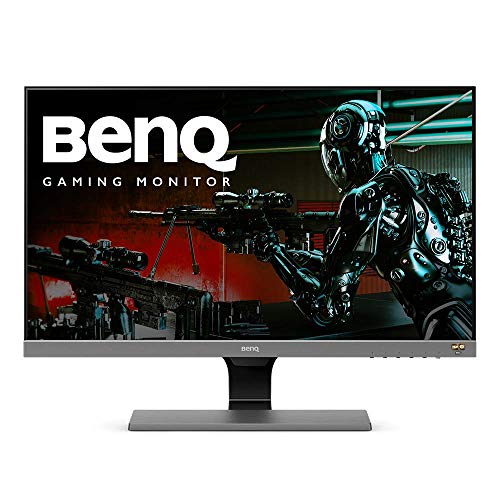 As mentioned earlier, the BenQ EW277HDR is capable of displaying HDR content, but you won’t be getting the sleek HDR performance of HDR-powered TVs, like the Vizio M65, that can easily peak 800 cd/m2 brightness levels through use of intelligent backlighting. Nevertheless, HDR supports enables the monitor deliver brighter colors and improved visuals, especially on true HDR content.

If all you need a monitor for casual gaming, binge movie watching and home photo editing, it’s an exciting choice to consider. A pair of USB ports would be better, as would a DisplayPort input. If you need better I/O inputs and a higher resolution, our Editors Choice ViewSonic XG2700-4K wraps all of that in a nicely designed panel with 4K support.