The Beelink SEi12, powered by a newer Alder Lake Intel Core i5-1235U, can perform almost any desktop task you need in a tiny, stylish enclosure. However, access to memory slots and NVMe drive for upgrades is far from easy.

The Beelink SEi12 is a real standout among mini PCs and is easily one of the best mini PCs for 2022. It packs a ton of horsepower into a miniature chassis, with room for more storage, and can support a lot of RAM. As the name hints, it packs a 12th-generation processor, meaning it flies through essentially every task you could want to run daily. The Core i5 chip used here is designed for laptops, as such, it delivers lots of power without overheating the tiny NUC chassis.

Costing hundreds less than a comparable NUC, the Beelink SEi12 envisages what I love about mini PCs. It packs enough power to do everything you could want on a desktop while taking up very little space. Like the Beelink SER3 I reviewed last year, the SEi12 Mini PC can be mounted almost anywhere – to the wall or the back of your monitor – with the included bracket, giving you an extremely unobtrusive desktop setup if you use wireless peripherals.

Our review unit arrives with an Intel Core i5-1235U processor boasting ten cores divided into two performance and eight efficiency designs. That’s a curious configuration considering that this machine depends on mains power, meaning power efficiency isn’t a priority if the machine can be kept cool while running.

In this Beelink SEi12 Review, I’ll explain why I think this is the ideal mini PC to get if you need more power than mid-range alternatives.

About the Beelink SEi12 Mini PC

The Beelink SEi12 is available in three configurations, starting with a model with an Intel Core i5-1235U processor, 500GB NVMe SSD, and 16GB RAM; then there’s another model with similar specs as the base model but comes with 32GB RAM. Then, there’s the top-tier model with a 12-Core Intel Core i7-1260P processor, 32GB RAM, and 500GB SSD storage.

Regardless of configuration, you get 500GB of NVMe storage, but it can be swapped for up to a 2TB drive if you need more storage.

Finally, for the latest silicon, the price is very reasonable and not excessively more than equivalent standard tower desktop machines.

Here are the specs on the Beelink SEi12 Mini PC

Most NUC systems have always had this simple styling, some have been wonderful, but some failed to stand out at all. But even without the unique designs, the SEi12 looks different from its predecessors and is easily as good as the latest official NUC designs, and I dare say, it is better in a few ways.

The innovative idea is the fabric covering the top surface, which allows for seamless air circulation. This fabric is coated in a hydrophobic substance that won’t allow a spilled liquid to easily sip into the system if it happens by accident.

This new feature, combined with effective heat management inside the SEi12 enclosure makes this system decently quiet even when subjected to heavy workloads.

The port selection is great, too. While it comes with one USB port capable of 10mbit (a single USB-C), the port should have been able to support an external display too. However, it just offers data connections, and the only monitor connections on this PC are the two HDMI ports.

For sure, setting up three monitors with this class of GPU isn’t very practical, but having the option to use a USB-C or Thunderbolt docking station might have been more useful.

To access the mini PC’s interiors, you just remove four screws on the underside. Here is where you start to notice some design flaws. Normally, you’d have access to the memory slots and the storage, but on the SEi12, you only have one way to add a 2.5-inch SATA drive. To access the memory and M.2 slot, you need to remove more screws and some care when handling ribbon cables on the inside.

Still, memory upgrades are pretty straightforward, as you only need to just remove the modules and replace them with the desired ones of the same specification. Since there is only one slot, upgrading the M.2 drive is fairly problematic as you’ll require a USB caddy.

Another issue worth mentioning is that a thermal strip is placed over the NVMe drive and that brings it into contact with the internal wall that separates the motherboard from the outer SATA tray. That wall is made of plastic, so it will not absorb heat as it’s an insulator.

Even with these gripes, the Beelink SEi12 is a nicely crafted NUC that exemplifies the high-quality devices that Beelink is now offering in its latest range of Mini PCs.

With an Alder Lake Core i5-1235U has a ton of power. This newer chip is more powerful compared to the Tiger Lake Core i5-11320H chip used in the Beelink SEi11 Pro, and it brings competition right into the Apple Mac Mini’s front yard. Granted this is a mobile silicon, but it still delivers rock-solid multi-thread processing, and combined with the Iris Xe graphics, the SEi12 is the mini PC to beat.

The 11th Gen mobile chips were something of a mixed bag and they didn’t offer much improvement over their 10th Gen counterparts despite costing more. With the 12th Gen silicon, however, Intel has woken up to the competition from AMD and is now offering chips with remarkable improvements in both single-thread and multi-thread processing.

A case in point is the Core i5-1235U used in the Beelink SEi12. This newer silicon boasts an impressive design that combines two performances with eight efficiency cores to deliver a fusion of speed and power efficiency.

However, since the SEi12 is a main-powered machine and doesn’t try to efficiently use a battery, as it could with laptops using the same chip, I just feel that some of these enhancements are rather cosmetic here. Perhaps, the only advantage it brings to this machine is in its thermal management, and not having more performance cores impacts the potential performance available to this system.

Did Beelink have to use this processor for the SEi12? While we can’t say the Alder Lake chip was the best here but considering that there are major changes in the architecture between the two, it might as well be.

A major improvement that these chips bring is that they now exclusively use the Iris Xe GPU, a significantly better performer than the pedestrian Intel UHD Graphics that laptop users have had to endure for years.

When combined with the impressive multi-core performance of the Core i5-1235U, the Beelink is potentially a potent system for its size and can easily outperform most 11th Gen desktop PCs that use Intel’s UHD graphics. And, to be specific, this is a better performer than the AMD Radeon RDNA 2 architecture GPUs that competitors use in their mobile processors.

As we’ve already alluded to, the features of the SEi12 are fine but somewhat understated. We also wish it had an SD card reader, multiple M.2 slots, Thunderbolt, or more Gen 2 USB ports.

Overall, performance is good, but the balance and the need to upgrade from the previous silicon aren’t very clear. As a result, you have a newer mini PC that’s better in some places and worse in others, in a way that you can’t easily predict its future as competitors pack even beefier hardware.

So, is the Beelink SEi12 a better NUC than the already excellent Beelink SEi11 Pro, especially when it costs more? That’s a tough call since typical tasks this type of hardware can handle are easily achieved with either machine, even without any killer feature. If you’re thinking of deploying many of these for an office or institution, the original SEi11 Pro is an excellent choice and surprisingly easier to upgrade than the SEi12.

On the other hand, if you’d rather have the latest technology over anything else, the SEi12 rocks newer silicon, even if the performance differences are relatively small in most scenarios.

And even with a modern NUC design as the SEi12 is, there are still better ones out there. If price is not an issue, the Asus ExpertCenter PN52 and the Intel NUC 12 Extreme Kit cost more but pack incredible power in tiny enclosures.

Should I buy the Beelink SEi12?

We typically see the Alder Lake silicon in laptops, which take advantage of the two efficiency cores. The SEi12 doesn’t utilize those cores since it’s a mains power machine that doesn’t need to offer efficient battery life.

If you need eight performance cores, two efficiency cores, and a minimum of 16GB of RAM, the SEi12 is a great little workhorse. If you’re into photo editing and some moderate video editing this mini PC can do it. Obviously, if your workloads exceed that, you already know that a mini PC like this one won’t meet your workstation needs. 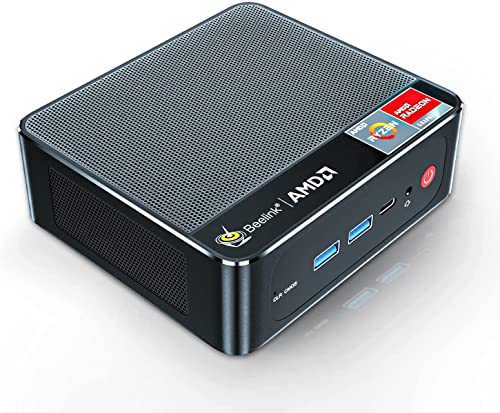 On a feature-value basis, the Beelink SEi12 is one of the best mini PCs you can buy out there with newer hardware. However, if you need to save some money and need to deploy multiple of these for the office, last year’s Beelink SEi11 Pro remains our Editor’s Choice. Not only does the original SEi11 Pro costs much less, but it is also powerful and easy to upgrade.