The Asus ZenBook UX333FA-DH51 is an excellent ultraportable laptop. Its   price tag is a few dollars more than earlier models, and that should worry you, but it buys you a system with many strengths and very few drawbacks. Overall, it is the laptop most people need.

The 13-inch ASUS ZenBook UX333FA-DH51 is perhaps the only laptop you’ll ever need.

For the past few years, Dell’s XPS 13 has always been at the top of our lists, but a strong (yet affordable) contender has always lingered in the shadows. The Asus ZenBook 13 300-series. It has managed to offer everything that Apple’s MacBook Pro 13 didn’t offer Windows users, and effortlessly delivered n great performance and practical portability. Its workaholic look was the only undoing.

The new Asus UX333FA directly corrects that weakness. It’s sleek, thin, more compact built, and is clad in a beautiful blue-and-gold look that debuted earlier on more premium laptops like the ZenBook 3.

Not only does it impress on looks, its internals are excellent. It packs a Core i5-8265U processor, 8GB memory, and 256GB solid state drive, all for less one grand. Is it the laptop that finally kills the Dell XPS 13?

A premium construction, a unique-blue-and-gold aluminum body and timeless portability make the ASUS ZenBook UX333FA-DH51 one of the sleekest devices I have reviewed, but it’s the surprisingly small size that will surprise you.

Asus reduced the ZenBook 14 into a clamshell that roughly the size of a standard A4 sheet of paper by eating into the display bezels to a mere 2.9 millimeters. The result is a 13-inch laptop with a screen-to-body ration of 92 percent, better than the luxe Dell XPS 13’S 80.7 percent ratio.

On the ZenBook 13, Asus uses an ErgoLift hinge we’ve seen on other ZenBook laptop and more recently on the ROG Zephyrus S released last year. With the new hinge concept, the laptop’s chassis lifts off the ground a few millimeters once you open the lid, and angles the keyboard downward by 3 degrees.

The raised keyboard is meant to provide a more comfortable typing experience, enhance cooling and boost the audio quality. While the benefits of these additions are minimal, you’ll find them beneficial in the long run.

The ZenBook 13 sports Asus’ signature concentric-circle design on the lid, surrounding a centered, golden ‘ASUS’ emblem. There is a stippled gold bar that runs across the point where the keyboard deck meets the display, with a centered Asus ZenBook logo.

The rest of the deck bears the same, sexy Royal Blue theme as the lid, while the keyboard features a darker indigo motif. A gold keyboard font and Harmon/Kardon branding wrap the exquisite color scheme on this laptop.

There is still more to like on the ZenBook 13. First, the sturdy aluminum construction is tested to MIL-STD 810G, in simple terms, military-grade durability. This level of certification is usually a preserve of price business-grade laptops, so I was impressed to find a consumer unit that is not just rugged.

For the average user, this level of certification means that it can withstand extreme temperatures, humidity and altitudes, and can bear drops and vibrations.
The laptop is only 0.55 inches thick and weighs about 2.7 pounds notably lighter and shorter than the heftier Huawei MateBook X Pro (2.9 pounds, 0.6 inches).

Connectivity is excellent for all your gadgets and peripherals. You’ll receive two USB-A ports, one 2.0 and one 3.1, along with one USB-C 3.1. Video comes via HDMI and audio is offered through a headphone/microphone jack. You also have small LEDs for battery level and power mode.

That said, I wish Asus would have opted for a Thunderbolt 3 port instead of the ZenBook’s slow-charging DC-in connector. For a laptop that cost northwards of one grand it is disappointing to omit a Thubnderbolt 3 port, meaning you won’t be able to connect to a graphics amp and even some docking stations. Wireless support includes 802.11ac and Bluetooth 5.0.

To have a 14-inch screen fit into a 13-inch body, Asus had to go for razor-thin bezels that give an immersive viewing experience. However, the lustre 13-inch, 1080p doesn’t get very bright like competing high-res screens. The display reproduces 121 percent of the sRGB color gamut, which is fairly above the premium laptop (117 percent). Compared, the MateBook X Pro reproduces 125 percent while the Gram reproduces 128 percent, both are very colorful.

If you’ll be using this laptop outdoors, its glossy, not-touch panel offers mediocre backlighting something that affects outdoor visibility. The screen gets 217 nits which is above the 200-nit mark, while competitors like the MateBook X Pro offer more than double the ZenBook’s brightness at 456 nits, and the Gram maxes at 308 nits.

From experience, thin laptops don’t always have uncomfortable keyboards. The ASUS ZenBook UX333FA-DH51 proves that by offering a fairly good typing experience, in as much as it won’t be suitable for every user. It uses a 1.1 millimeters backlit keyboard with nice tactile feedback and needs 64 grams of actuation force to respond, which isn’t a lot considering that the island-style never get you fatigued.

If you’re a pro-typer, the cramped deck might be annoying, rather, complicate your typing experience, which is among the few sacrifices you make to such a svelte system. As such, it isn’t a deal-breaker as you can always adjust your typing style.

On the other hand, the ASUS ZenBook UX333FA-DH51 has a 1 x 2.4-inch touchpad that is well placed, though not very sensitive to tap-to-click functions, something that might tempt you to revert to the left-click button. The touchpad has an integrated LED-illuminated numpad which can be activated by pressing a small icon in the corner, that simple.

Once you press the button, a grid illuminates on the touchpad surface, where you can type numbers and mathematical functions. This feature works well, and we hope Asus adds some capacitive feature in future models.

Powering the ASUS ZenBook UX333FA-DH51is Intel’s Core i5-8265U CPU and 8GB of RAM, a feature set that does a good job handling rigorous daily computing hassle free. If you’ve always wanted a petite system that can load up to 15 Google Chrome tabs and while at it stream three 1080p videos without slowing down, this is right for you.

However, with all those tabs open, I realized that the cursor slowed down as I flipped through the open tabs. A simple refresh corrects the glitch, so it isn’t something to be worried about.

Storage comes in way of a 256GB NVMe SSD that lets you transfer files at great speeds (506 megabytes per second), which is at par with the competition (at least for now) – LG Gram leads the pack with 164.7 MBPs while the MateBook X Pro delivers transfer speeds at 512.9MBps, almost the same as the ZenBook.

The integrated UHD 620 graphics in our review unit isn’t suitable for gaming. If you must play, though, you can get away with casual games at very basic setting. You can look at something with a dedicated graphics solution such as the Asus ROG Zephyrus S if you need something extremely portable, but at a cost, or the MSI GV62 8RD-200 (our Editors’ Choice for budget gaming laptops).

The ZenBook 13’s battery lasted 8 hours, 32 minutes, on rundown tests, which is expected of an ultraportable, although we’re seeing others like the LG Gram (10: 53) and MateBook X Pro (9:49), almost hit the 10 hours mark.

The premium laptop average is 8 hours 17 minutes, which is still below the ZenBook 14’s endurance. There’s a 720p camera on the top bezel, as always, its lackluster and only surfaces for casual chats.

The ASUS ZenBook UX333FA-DH51 is an excellent ultraportable laptop. Its price tag is a few dollars more than earlier models, and that should worry you, but it buys you a system with many strengths and very few drawbacks. Overall, it is the laptop most people need.

Dell has the XPS 13, and it’s a better laptop, but while at it, it is considerably more expensive for similar equipment. Not everyone will tolerate the idea of improvements, like a better keyboard layout and superior design, justifying the price hike.

Other alternatives around really don’t stack up, unless you’re buying Asus’ very own ZenBook UX433FA-DH74. The Acer Aspire 5 and Lenovo Yoga 730 come up short in multiple areas. The Apple MacBook Air also falls short in processor performance, despite having a thin profile – plus, it’s more expensive. Huawei’s newest MateBook Pro X is a good choice too, only that its flying off the shelves fast, so you might not get it at a bargain price.

Absolutely. The ASUS ZenBook UX333FA-DH51 remains the gold standard for affordable ultraportables for both office use and college. If you’re looking for an excellent laptop, but don’t want to spend thousands for the same hardware, this is just right for you. 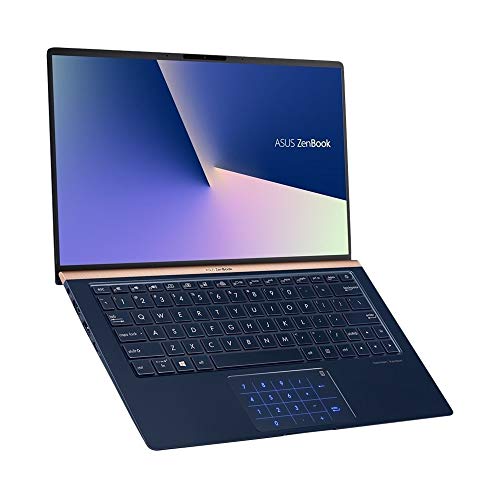