The ASUS VivoBook F510UA-AH51 is a 15-inch laptop with a nice aesthetic footprint, a solid feature set that can easily rival some of its premium rivals. It checks all boxes for work or college laptop that won’t cost much but offers solid performance for the budget desktop-replacement category.

It’s always easy to tell laptop shoppers, especially those on a budget, to hold out for a value system with 8GB of memory, 1TB storage and a Full HD IPS screen. And, it is a little easy to tell them to cough up the dollars required for such a system once it pops up. The Asus VivoBook F510UA-AH51 is one such daily use laptop with robust features and a surprisingly good build quality, but its price is firmly in the budget category.

If a sleek design and decent day-to-day performance are what you’re after, and your budget limit is right under $600, the Asus VivoBook F510UA-AH51 will prove an excellent value and should be near the top of your shopping list.

Those numbers seem to have moved in the right direction – a good thing, but we’re starting to see where Asus has cut costs with this machine. Aside from the lid, that is clad in gorgeously spun star gray finish, the entire body is cut from plastic. The system gets a shiny coating that mimics an aluminum construction, but it isn’t anything close to the gorgeous carbon-fiber finish on Dell’s latest XPS 15, or even the timeless aluminum build of Apple’s MacBook Pro with touch bar. 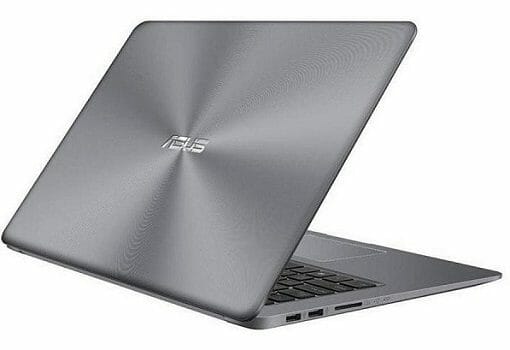 Asus has a good reputation for its VivoBook brand, and it’s only going to win more fans here, with a full HD (1920-by-1080) resolution screen. It uses In-Plane Switching (IPS) panel technology to deliver vibrant colors and clear images, something we only see in notebooks that cost more. The full HD screen is a delight to use, both for serious office tasks and for watching movies, with great viewing angles.

In fact, it’s a NanoEdge display that has an 80 percent screen-to-body ratio, giving you more screen estate over the body bezel. Asus claims that this VivoBook uses their in-house Splendid Visual Optimization technology, which, apart from being a marketing gimmick, I don’t see any major improvement that would set it apart from other entry-level IPS panels.

On the Asus VivoBook F510UA -AH51, the design, and screen should be the main attraction before you look at even performance. Another thing should be its weight. It’s light. Seriously so, but it doesn’t feel flimsy because of the lightweight profile.

If there’s one thing I need to criticize, it could be the standard VGA, which isn’t going to do anyone any favors. In 2018 we simply expect things to be better. Especially when Asus decided to design a well-rounded system at a very reasonable price. The speakers are surprisingly good, managing good maximum volume and a little tone of bass. I’d gladly watch YouTube and Netflix with these speakers, they can fill a small room, and music plays well. 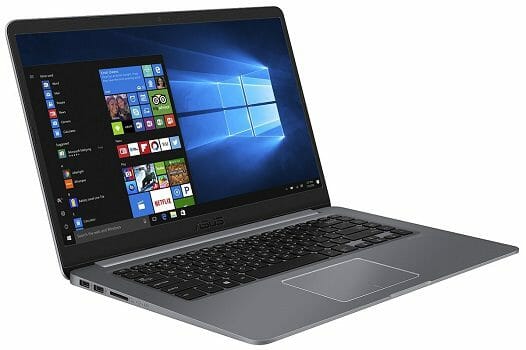 The same material used in the body is replicated in the keyboard deck and touchpad. Still, it offers a decent amount of key travel and a comfortable feel, though, the keys themselves aren’t particularly luxe. They do take another point from this laptop’s premium construction, but it’s a design you won’t be seeing in similarly-priced systems.

Despite the laptop’s compact size, the keyboard is big in all the right places, with nicely sized letter and number keys. The Backspace and Enter keys are large enough, the Shift key is the same size as the rest of the keys, which is sometimes hard to hit, but over time you’ll get used to it. For the touchpad, it is fairly good, but it doesn’t give you the instant feel you get from the likes of XPS 13 and MacBook Air.

With a thinner chassis, the number of full-size USB ports is lower than what you’d find on notebooks, and the optical drive is also dropped. On the Asus VivoBook F510UA, all you have is a USB 3.1 port (Type-C), a USB 3.0 port, a USB 2.0 port, and an HDMI port. The HDMI is the full size, which is better than the mini-HDMI that’s becoming common among ultrabooks.

With USB 3.1 Type-C connector, you can power peripherals such as USB monitors and storage arrays seamlessly. Also included are an SD card reader and a 3.5mm headset jack and a webcam, but the Ethernet port is gone. Wireless connectivity comes via 802.11ac Wi-Fi.

The Asus VivoBook F510UA has 8GB of memory along with 1TB 5400rpm of storage. That does sound like a lot of storage space, but its slower than the solid-state-drive (SSD) storage you get on modern systems. For instance, the ASUS ZenBook UX330UA-AH54 comes with a 256GB SSD, while it isn’t a lot, it does suffice for faster boot times and snappy overall performance. There’s a m.2 2280 slot next to the hard drive, so you can easily throw in an SSD for fast boot times. 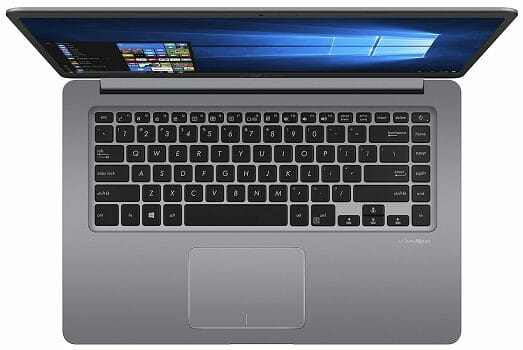 The Asus VivoBook F510UA FHD laptop is among the first releases to sport the Intel’s eighth-generation family of processors, and based on the success of the previous Kaby Lake processors, we’re looking forward to even better performance. The system is equipped with a quad-core 1.6GHz (turbo up to 3.5GHz) Intel Core i5-8250U processor and 8GB of RAM, Intel UHD Graphics 620.

This is the same configuration we’ve seen on the ASUS ZenBook UX330UA-AH55. Though, the earlier iteration was fitted with a quad-core 2.5GHz Intel (Kaby Lake) Core i5-7200U processor and the same memory and graphics card.

This CPU has four processing cores, eight processing threads and operates between a base frequency of 1.6GHz and a turbo frequency of 3.4GHz. It adds some much-needed performance, as well as quite a bit of extra battery life over its predecessor ‘Kaby Lake’, which was a sticking point of the previous ZenBook models. What’s truly impressive about this system is how ASUS managed to fit in an 8th-Gen processor and enough memory in such a tiny machine.

With a CPU Benchmark score of 7381 points, it sufficient for day-to-day performance, but not enough to enable the system close-in on systems like the Apple MacBook, Dell XPS 13 Touch, and HP Spectre 13. Look at it, the MacBook Air with the same specs costs almost double, and you don’t get the Windows 10 experience.

On the ASUS VivoBook F510UA  is the integrated UHD 620 graphics, typical to midrange ultraportables, which don’t provide much room for 3D gaming. The ZenBook’s Kaby Lake-R processor is fairly new, and together with a dual-channel RAM, its performance is almost at par with most dedicated lower mid-range graphics cards. In short, its gaming capabilities are limited. At low resolution and low to medium quality settings, you can smoothly run games; especially true for games that do not tax the hardware so much. I tested it with hardware-hungry titles like the Witcher 3 and the frame rates were not anything close too good.

For midrange gaming, you might have to look at the ASUS VivoBook M580VD-EB54 which comes with a dedicated NVIDIA GeForce GTX 1050 gaming graphic card, or better still the Acer Predator Helios 300 thanks to its potent NVIDIA GeForce GTX 1060 6GB GDDR5 graphic card. If we get nitty, the Zenbook AH54’s gaming performance is on par with Apple MacBook Air 13-inch and the Dell XPS 13 Touch, though with slightly negligible differences since none of the three can run high-end 3D games smoothly.

Battery life is not-so-great, though. We expected taht with the newer chip mobile computing would be better, but looks like we will wait a little longer. We are looking at something around 5 hours 42 minutes on a single charge, which is around the same ballpark with the likes of the Dell XPS 15 Touch (9550) (5:56), but a fairly lower than the MacBook Pro 15-Inch Retina Display (2014) (8:55).

It may weigh more than the svelte ultraportables, but it will last almost as long as most 15-inch laptops. This laptop can last enough for a day at school or at the office on moderate use.

The ASUS VivoBook F510UA-AH51 is  cheaper than most 15-inch laptops, and with its feature set, it is the best value around for a budget. While the 1000GB of storage is more than sufficient for most users, it would have been better if Asus would have thrown in an solid-state-drive (SSD) for loading apps and programs, while the hard drive can be used exclusively for storage.

In this ASUS VivoBook F510UA review, it is clear that depending on your computing needs, alternatives are many. The most definite alternative must be the newer Asus VivoBook 15 , a 2019-release of the VivoBook base model, with a faster AMD Ryzen R5-3500U, AMD Radeon Vega 8 Graphics, 8GB RAM and 256GB SSD. It tops up everything with a new design and offers extended battery life.

Yes. At launch in late 2017, the ASUS VivoBook F510UA-AH51 was our Editors’ Choice, but Asus have since updated its Vivobook line with better machines including the Asus VivoBook 15 (F512DA-EB51) we’ve recommended above.

Again, competitors have also updated their budget 15-inch offerings to include the Acer Aspire 5 A515-54-51DJ, which is our newest Editors’ Choice for budget general-use laptops. Either way, the newer VivoBook 15 and Aspire 5 offer better value that last year’s Vivobook. In the world of computing, new is mostly (though, not always) better. 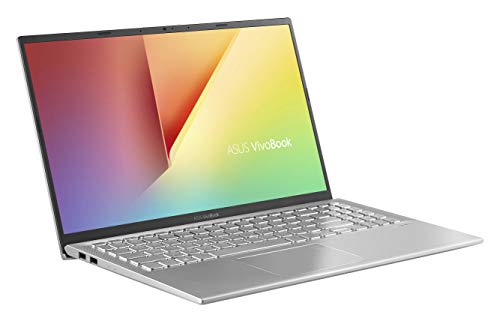