The AOC CU34G2X is a 34-inch gaming monitor with 144Hz refresh rate, 1ms response time and AMD FreeSync support with HDR, and delivers game performance that’s among the best we’ve seen at its price point. It’s definitely worth serious consideration if you’re seeking an ultra-wide monitor.

If a monitor faces an uphill task to stand out, then it must be the AOC CU34G2X gaming monitor. The battle to be the best ultrawide gaming monitor in a crowded market isn’t for the low-res fellows – surely, how do you make a mark when black and red gaming displays are the norms? By delivering superb performance and not telling.

Rather than advertising its exquisite gaming nature via sharp angles and superb RGB lighting, this sprawling, ‘frameless’ monitor works hard to deliver class-leading performance instead. While it may not look like much from the outside, the 34-inch CU34G2X packs a punch.

Unlike competitors with over-the-top RGB lights, the AOC CU34G2X is refreshingly subtle. This screen takes a more subdued approach with its sleek black red accents along the chassis that looks like it can take a few more knocks.

Because the base is made from sturdy metal, so the monitor isn’t going anywhere fast – you shouldn’t be worried of it toppling over is your desk gets knocked.

However, the monitor’s modesty won’t be for everyone, some people prefer some bling to put them in the gaming mood. Though it is a handsome bit of tech, you can also argue that it’s dull. After all, this is a workmanlike piece of equipment without much flair, for better for worse.

After all, AOC are not alone with this design, the ASUS ROG range looks similar lessening the impact – every monitor we’ve reviewed these days seems to be constructed from angular black plastic with red trimming, so the dull design disappears into the crowd as a result.

All that aside, the AOC CU34G2X has a lot to offer; everything from the ultrawide 34-inch QHD screen with 21:9 widescreen resolution (3440×1440), 144Hz refresh rate to a 1ms response time are all spectacular.

It even offers AMD FreeSync, not to mention the half-a-dozen SS USB ports and the usual display features. Simply said, it’s packed with all the features you’d need for modern gaming.

Luckily, the AOC CU34G2X’s performance is much better than any of our design quibbles can extinguish. The 1500R curve doesn’t feel too pronounced when leaning in close over your keyboard, and it delivers one of the most immersive experiences you can ever get when you slap on a gaming headset as well.

It gets better, though, it’s super responsive thanks to the 144Hz refresh rate and 1ms response time – free of any perceptible screen-tearing even during the intense, busy firefights of The Division 2, for example.

Again, you don’t need no adjustments for great color-balance; the hues and shades Ubisoft’s shooter and Total War: Warhammer 2 will look gorgeous right out of the box. When it comes to range, the CU34G2X is no slouch either. Metro Exodus will be a good shadow of light, and AOC’s latest monitor does a splendid job.

The screen’s HDR features are pretty good as well, despite the CU34G2X not being an actual HDR monitor. They still result in rich, vivid, and deep shades, but you shouldn’t expect anything mind-blowing (and remember standard DisplayHDR mode might be a bit grainier for your liking).

On the downside, getting the best gaming settings is a bit of a gamble. That’s because you need to press the menu button to bring it up, press again to activate the setting you desire, make any changes with the left or right buttons, and then press to lock your choice into place.  The buttons themselves feel small and somewhat tacky. But hey: when the performance is excellent, we can forgive that, and it doesn’t matter that much.

Should you buy the AOC CU34G2X?

Despite the somewhat flat design, the AOC CU34G2X is the Swiss knife of budget, ultrawide monitors – it cuts where it counts. Superb performance and thrilling technical stats make it a worthy purchase, particularly at that sub-$500 price. 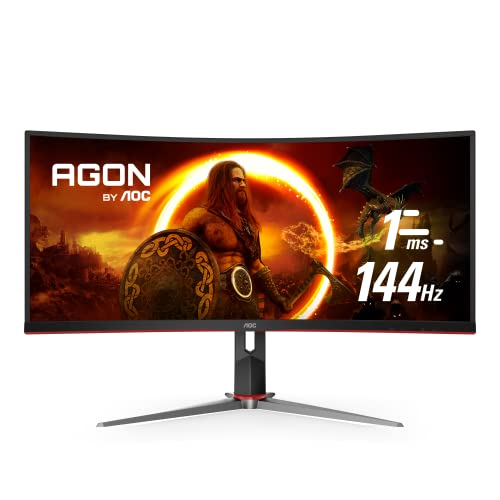 Compared with the current crop of monitors, this is a screen that will serve you well going forward. A 144Hz refresh rate and 1ms response time ensure that the demanding games on your horizon – such as Cyberpunk 2077 – will look their best.

And while it isn’t a 4K screen, we don’t consider that a huge concern right now; 4K gaming is an expensive affair requiring nothing but the best hardware, so the AOC CU34G2X is a fine choice for now and the next many years.