The Acer Swift X SFX14-41G-R1S6 is a budget-friendly laptop for creators and professional artists that brings some serious power to the mainstream productivity category, and class-leading battery life.

For creators. Announced on time for Computex 2021, the Acer Swift X SFX14-41G-R1S6 elevates the Acer Swift brand into the creative laptop world, with solid specs delivered at a great price, without including rarely-used extra features that make some of the best laptops around so expensive.

So, the Acer Swift X doesn’t try to be the thinnest or lightest laptop, it neither packs the Dell XPS 9310’s fancy OLED display nor the Asus ZenBook 13’s thin bezels. Instead, it shines where it matters: a speedy AMD Ryzen processor and for the first time, you’re getting up to an Nvidia GeForce RTX 3050 Ti graphics card, which is the best around for a laptop this thin, even if you don’t shell out for the fanciest of laptops on the shelf.

Our review unit of the Acer Swift X is the SFX14-41G-R1S6 model, which pairs a capable Ryzen 7 CPU with a beefy RTX 30 Series GPU for the best real-world performance, making it a great laptop for anyone who just needs something that gets the job done – from gaming, professional content creation to general productivity.

The Acer SFX14-41G-R1S6 basically looks like any other Acer Swift laptop, and that’s actually what works in its favor. It keeps things toned down, simple, but not ugly, and you won’t be ashamed to snap it from a backpack in a coffee shop – whenever working on a laptop at the coffee shop, looks do matter.

Measuring just 0.7 inches (17.9mm) thick and weighing in at 3.06 lb. (1.39kg), the Acer Swift X is a bog-standard laptop design in 2021, but it’s still within the portable size for throwing in your backpack for your daily commute.

Again, even though the Swift X is a bit on the plain side, the chassis and hinges are extremely solid and sturdy. The aluminum chassis feels premium, and mimics the silver color you’d find on the Apple MacBook Pro 13, and there’s no flex anywhere. Even the display is incredibly solid, so you shouldn’t be worried of it caving in should it accidentally slip from your lap.

The Acer Swift X’s standard thickness does allow for a good selection of ports, especially by today’s standards. On the left side, there’s an HDMI, a USB-A, and a USB-C which can be used for charging, and a dedicated charging port.

On the right, there’s a USB-A, a combo 3.5mm audio jack and a Kensington Lock port. While most laptops are trimming larger ports, we’re happy to see standard ports on the Swift X. However, considering that the Acer is pitching the Swift X for students and creative professionals, we’re disappointed that the there’s no SD card here. There’s en3ough real-estate on the laptop’s right side.

The Acer Swift X has a 14-inch 1080p display, with 300 nits of brightness and covers 100% of the sRGB color gamut. We’re satisfied for what it is, but a more colorful or high-res display might be more useful for creative work.

But for office use and schoolwork or sending a couple of emails, this laptop is more than perfect. Sound output is on the bare minimum, but it isn’t going to fill a room, though the speakers are enough for a quick call without scavenging for your headphones.

The keyboard is great for long tying sessions, and it’s incredibly comfortable for the price. It has nice travel; individual keys are deeps and your fingers won’t hurt when they bottom out. Many laptops skimp on a comfortable keyboard, but the Acer Swift X deliver the much-needed luxury.

Below the keyboard is a spacious touchpad, that’s fast and responsive to touches and swipes. There are plenty of other features, too, including a Windows Hello camera for face, or you can use the integrated fingerprint scanner for that instead.

The Acer Swift X SFX14-41G-R1S6 packs AMD Ryzen 7 5800U processor, with upto 8-cores and 16 threads, meaning multitasking is going to be a breeze. And while the laptop’s integrated graphics is extremely strong, Acer pairs it with an Nvidia GeForce RTX 3050 Ti dedicated graphics card, alongside 16GB RAM and 512GB SSD. Still, that doesn’t make this a gaming laptop, though.

It seems like this RTX 3050 Ti discrete graphics card here is meant to boost creative workloads like Adobe Premiere and Photoshop, rather than loading Cyberpunk 2077 during your breaks – even though that option is still very open to you.

However, should you want to play some light gaming, the RTX 3050 Ti is a great fit for 1080p gameplay. With that GPU, you can play pretty much anything at native resolutions, though you might have to lower quality settings in a couple of gamers here and there.

Acer claims that the Swift X can last up to 14 hours on a single charge, we’re just hopeful that it can last as much. Overall, by just looking at the laptop’s feature offering, we believe there probably isn’t much it can’t do. 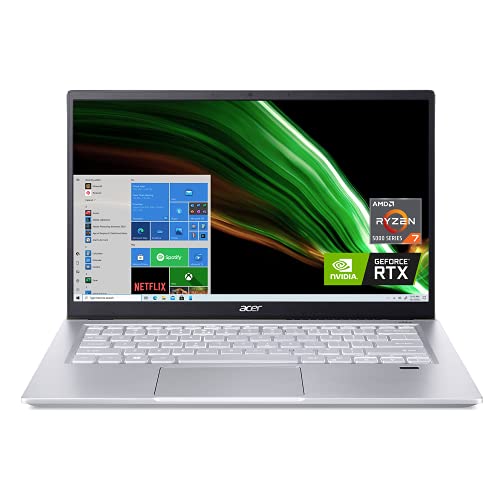 The new Acer Swift X is a little, badass workhorse laptop. It’s not exactly your fancy ultrabook, and it won’t necessarily turn heads when you unleash it at the local coffee shop, but that’s not really what it’s there for. Acer created this laptop for a simple purpose – get the work done without any extra bells and whistles.

If you like simplicity over everything else, the Acer Swift X SFX14-41G-R1S6 is certainly a great laptop for you. It is one of those laptops you get when budget and productivity are at the top of your list – and these days, that’s all we can ask for in a laptop.