The Acer Predator Orion 3000 PO3-640-UA91 sports a lovely new RGB design and goes beyond just a pretty face. This machine packs the latest specs that make it a very capable gaming machine that’s future-proofed for years to come.

There’s a new Orion in town! The latest Acer Predator Orion 3000 PO3-640-UA91 is a mid-sized gaming PC that looks attractive in a refreshed design over its predecessor, affordable and one of the best gaming PCs you can buy right now for playing games at 1080p to 1440p.

It’s not an excellent choice if you’re looking to play games at 4K, of which you need high-end rigs like the Asus ROG Strix GA35 with its RTX 3090 GPU, but with the Predator Orion 3000, you’re getting an RTX 3070 GPU that should be ideal for most of us. Also, its packed-in keyboard and mouse leave much to be desired, and it also doesn’t stand out among competing gaming machines, perhaps because our review unit arrives with just 16GB of RAM.

Luckily, the Predator PO3-640-UA91 has a stylish case that’s easy to open if you ever want to, say, add more RSM or swap out the GPU. It’s still hard to imagine why you might want to, though, given that at the time of writing this review the GPU shortage isn’t extreme, you can always swap the Nvidia GeForce RTX 3070 in our review unit with something better if needed.

In this review, we take a dept-dive into the strengths and weaknesses of the new Orion 3000 and show you why it’s got more going for it that just the beefy RTX 3070 graphics card.

The Acer Predator Orion 3000 PO3-640-UA91 we’re reviewing arrives packaged with a keyboard and mouse in a single box. The entire set is easy enough to unbox, and the Orion 3000’s mid-tower case is light and compact enough (measuring 14.84 x 6.89 x 15.16 inches and weighing 11.84 pounds) to fit neatly into most desk arrangements with minimal fuss.

The Orion 300o could also sit comfortably next to a TV if you wanted to play PC games on the big screen, but nobody will mistake it for anything but a gaming PC – the signature plastic and metal chassis sports a flat design with a protruding centerpiece and a big RGB-lit fan on the bottom that might make it hard to work into an entertainment center.

The case arrives clad in matte black siding, with a tempered glass side panel that displays the internal components as well as RGB lighting on the inside. It’s a nice touch that gives you a clear view of the PC’s internals, and it makes the process of swapping the panel pretty quick and painless – just a Phillips screwdriver and a few minutes of light work are all that’s required. My only issue is that the four screws which hold the panel in place stand out prominently against the smooth glass, killing the Orion 3000’s streamlined look.

Port selection is excellent with almost all the ports you’d ever need on a midrange gaming PC. The front panel has easy access ports – a USB-C, a USB-A, and separate headphones and mic jacks. Around the back, you’ll find four USB 2.0 ports, two USB 3.2, audio jacks, and an RJ45 Ethernet port.

The Nvidia GeForce RTX 3070 GPU provides an additional 3 DisplayPort jacks and an HDMI out. That’s solid enough and you may never need to invest in a dongle or a USB hub – but you might want to, especially if you’re planning on investing in a lot of USB-C accessories.

Not surprising for an RTX 3070 powered machine, the Acer Predator Orion 3000 will not only play modern titles at 1080p and high settings fluently, but it’s also no slouch at 4K either, with many games hitting and maintaining 60fps at a high resolution.

Playing Forza Horizon 4, a graphically demanding and process-heavy game, the Orion 3000 runs it without a hitch at Ultra settings. Similarly, intense AAA games like Doom Eternal and Cyberpunk 2077 are also capable of a 4K 60fps performance, but it’s worth noting that you’ll experience occasional frame drops with the latter. This is due to Cyberpunk’s busy open-world setting as well as its infamously rocky optimization thus far.

Still, the Orion 3000 PO3-640-UA91 is capable of running some of the most visually stunning games out there at 4K, while maintaining a consistent high frame rate, thanks in part to the high-end GPU Nvidia RTX 3070 GPU in the machine.

But if you’re just getting into PC gaming or not fussed about 4K, the machine’s 1080p performance is even thrilling, where you can expect to play games at a high, unlocked frame rate. This is great if you indulge in multiplayer titles like Apex Legends, or League of Legends or are planning on acquiring titles like Battlefield 2042.

On the side, we can recommend trying out ray tracing modes where applicable, too. You can even load it up with Control for a start, which arguably features one of the best implementations of the lighting tech so far, and we’re certain you’ll be satisfied by the Orion’s performance.

However, remember that ray tracing can knock on the PC’s overall performance, and while it won’t throttle games, the frame rates will take a hit from time to time and the PC’s temperature and fan speed will spike. However, there’s no cause for alarm, and the machine’s excellent cooling system is more than up to the task.

Keep in mind the Orion 3000 is VR ready and its performance with any VR headset such as the Valve Index is nothing short of stellar. If you own a VR device like that or the Oculus Quest 2, you can readily run graphically demanding VR titles like Half-Life: Alyx superbly on this machine.

Lastly, this Acer Predator Orion 3000 can be used for productivity tasks when not playing games. The 12th Gen Intel Core i7-12700F (12-core), 16GB RAM, and 512GB SSD + 1TB HDD will keep you running most productivity tasks with ease. That SSD option is as quick as you’d expect from the technology, and the extra hard drive ensures that you have enough storage for your game files.

In a lot of ways, I’m convinced the Acer Predator Orion 3000 PO3-640-UA91 is the perfect gaming machine for anyone just getting into PC gaming, and pretty much everyone else looking for a performance machine without splashing lots of money on a gaming rig. The unit we’ve reviewed can be had for under two grand, but you’ll still enjoy the brawn of an RTX 3070 GPU and a 12th Gen Core i7 CPU in a sleek, mid-size case that lights and looks great on a desk.

The case itself is easy to open and when you’re ready to through in beefier components (more RAM would be a good start), it has the space, but even if you never upgrade it, this PC has enough power to play the latest AAA games at high frame rates for years to come. Plus, it arrives in a neat package with a serviceable mouse and keyboard, in a single box that’s easy to open. 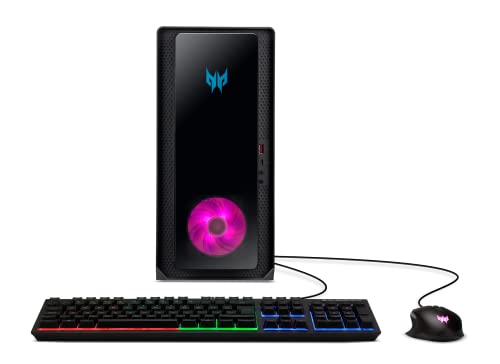 However, if you’re looking for the absolute 4K gaming beast, a prebuilt gaming PC like the Corsair ONE i300 or the Alienware Aurora R14 is worth splurging on the extra bucks. That way, you’ll spend more but enjoy true 4K PC gaming greatness. Otherwise, if you’re on a tight budget, we can’t recommend the Acer Predator Orion 3000 PO3-640-UA91 more highly.