The Acer Predator Helios 300 PH315-53-71VG is easily among the best out there, and it’s just a step below the best (but pricier) gaming laptops. If you’re on a limited budget, you can’t really ask for a better deal.

The newest Acer Predator Helios 300 PH315-53-71VG is, in all respects, is one of the best gaming laptops you can buy. With that, there are a few rough edges about the device that are quite obvious and some too important to ignore, and there are a couple of corners cut as well. But, as with all budget gaming laptops, a few compromises are expected, for as long as they don’t compromise performance. If you want the best of the best, after all, you might have to spend more for the best.

That said, we are impressed with the PH315-53-71VG’s performance at this price range. This is a capable machine for a midrange gaming laptop. It can handle most demanding games at medium to high settings. Its 240Hz refresh, is surely better than the 144Hz you find on most gaming laptops of its kind. It has a crisp, 1080p display with true-to-life colors for an immersive viewing experience.

Is it possible to do better? If you have the money, of courses. But if you’re a little cash strapped, the Helios 300 PH315-53-71VG is one of the best you can get for the price.

In all fairness, we can’t fault the Acer Predator Helios 300’s design. It doesn’t mean that it’s an absolute best, but it isn’t poor either.

This gaming laptop sports angular planes and lines, is dressed in a black metal casing and gets some tasteful chrome accents. There are exhaust vents that run along. The side and rear, adding more taste to the overall design, but you should be aware of the top metal that collects smudges really fast.

Acer bills the Predator Helios 300 PH315-53-71VG as a gaming laptop, but the number of ports it has make it passable as a workstation or a content-creation hub. On the right side, you have Thunderbolt 3 port, a USB 3.2 Gen 2 port, a Mini DisplayPort 1.4 input and an HDMI port.

The left side hold a pair of USB 3.2 ports, a Kensington lock, an Ethernet port and a 3.5mm headphone jack. On this laptop, the power jack is located near the rear.

We could be fine with less than 1-inch screen bezels. Other than that, we’re quite happy with the 1080p display. It has true-to-life color reproduction, with very good blue and magenta hues that are pretty warm for gaming and watching movies.

The display also boasts a 240Hz refresh rate, which you rarely see in budget gaming laptops. This is a major upgrade from last year’s Acer Predator Helios 300 model, and it helps minimize blur and makes up for dropped frames. It averages 278 nits of brightness, which is slightly below the 295-nit average, coming short of its closest competitors – the Zephyrus G14 (323 nits), the MSI Raider (300 nits), but better than the Aorus (243 nits).

As for the keyboard, it has well laid keys that are clicky with appeasing feedback. The highlighted WASD keys, arrow keys and hotkeys have a slight concave shape, which is just perfect during intense gameplay sessions.

Below the keyboard is a 4.2 x 3.4-inch touchpad that’s an ultimate stand-out. Windows 10 gestures are very precise, even when performing three or four-fingered gestures, you simply feel the nice response. The bottom corners on the touchpad are responsive and have a solid click when you press them.

Featuring a 2.6GHz Intel Core i7-10750H processor, 16GB of RAM, and 512GB PCIe SSD, the Predator Helios 300 PH315-53-71VG will not struggle with any productivity tasks. It can run 45 CPU-draining Google Chrome tabs, with one streaming a HD Hulu video, some running gadgets reviews on YouTube and others playing Ted Talks, all without lagging.

If you create lots of video content, the Helios 300 is a fine candidate for editing and rendering. It renders media as quickly as a typical desktop, especially those media creation hulks fitted with a desktop processor and 32GB of RAM. In case you’re in a remote location shooting some video and need some quick edits, this gaming laptop would more than do the job.

With the 2020 Acer Predator Helios 300, Acer takes a double-barrel graphics approach by using a discrete Nvidia GeForce RTX 2070 Max-Q GPU with 8GB of RAM and an integrated Intel UHD GPU. Depending on the task at hand, the laptop switches between the two using Nvidia’s Optimus technology. The result is smooth gameplay, free of any stutters or dropped frame rate, even without engaging the turbo button.

On Far Cry New Dawn, the Helios flexes it gaming muscle to yield 81 fps, against the 70-fps mainstream gaming laptop average of 70 fps. The Zephyrus scores 72 fps, however, the MSI Raider triumphs over the competition with 99 fps, while yet the Aorus comes second with 88 fps. On VRMark Cyan test, the Helios 300 scores a solid 6,600 which is excellent at this price range, meaning you’re safe with your VR headset here.

When you’re not running any graphically intensive task, the PH315-53-71VG switches over to the integrated graphics to save on battery.

Gaming laptops are rarely great when it comes to retain power, and the Helios 300 is no different, lasting on 3 hours 14 minutes on a single charge. That’s below the mainstream gaming laptop average of 6:15, but it’s still acceptable for what it is. The MSI Raider maxes out at 4:58 while the Aorus clocks 6:18, but the undisputed winner is, without a doubt, the Asus Zephyrus G14 at 11:31.

We’ve said it several times, and we’ll still say it again: the Acer Predator Helios 300 is a powerful midrange gaming laptop that’s priced in the budget spectrum. Yes, there are obvious signs that Acer did cut corners, particularly the set of speakers that are unimpressive and a middling camera that you can rely on for shoots. Yet, while those are glaring flaws, they are not complete deal breakers – to remedy, invest in a good pair of headphones and get a clear webcam when you need to do shoots. 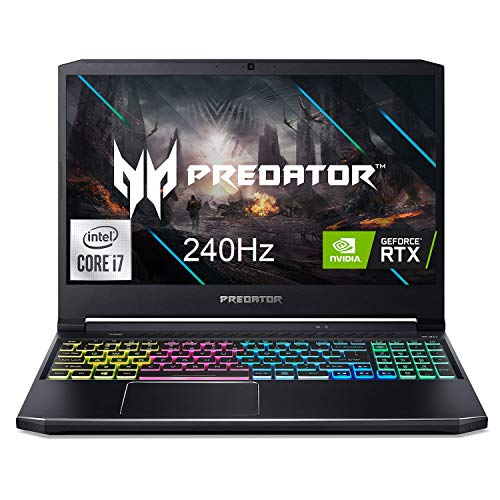 The main thing to focus on here is that this gaming predator packs some power for the price, enough to handle the most demanding games even at ultra-settings. The laptops also boasts a 240Hz refresh rate which you only see in pricier models, and beautiful color reproduction, which both result I a beautiful display.

The Acer Predator Helios 300 PH315-53-71VG is easily among the best out there, and it’s just a step below the best (but pricier) gaming laptops. If you’re on a limited budget, you can’t really ask for a better deal.