This year’s Acer Nitro 5 AN517-54-77KG brings with it a colorful big screen as well a strong range of components and premium features like high refresh rate that help it reach beyond its budget trappings.

Acer’s latest addition in the budget midrange gaming PC niche, the Acer Nitro 5 AN517-54-77KG ticks off the right boxes for your portable gaming and productivity needs. Ideal for budget-minded gamers, this gaming laptop certainly expands your scope for a big-screen, 17-inch laptop, that rocks almost the same hardware as its 15-inch stablemate, the Acer Nitro 5 AN515-55-53E5 that we reviewed a few days ago.

That’s because Acer Nitro 5 offers more for less, especially when stacked against competing laptops such as the ASUS TUF Gaming F17 and the MSI GE75 Raider. For around one grand, it rocks an Nvidia GeForce GTX graphics card and a peppy Intel Core i7-11800H then rounds it all with a decent 1080p screen (144Hz refresh rate) and a keyboard comfortable enough for work and play.

With its combination of low price, fairly powerful specs and a solid feature set, its agreeable that the 17-inch version of the Acer Nitro 5 is one of the best value big screen laptops out there. However, to hit the sweet price, some sacrifices have to be made, but we’re glad that none of those affect the laptop’s performance enough to matter, especially for the savings it offers.

As for the look and feel, the Acer Nitro has more to be desired – but, that’s not to say it’s plain bad – in fact, there’s are things to appreciate here.

Nonetheless, we like the minimalist gamer look, with red trimmings on the keyboard, backlight and trackpad as well as the upper rear bar. The display hinges are sturdy and secure, and the available number of ports is a boon.

Beyond that, there’s nothing to write home about the Acer Nitro 5 design. The screen lid, for example, is made of cheap plastic, and the area around the keyboard track picks fingerprints like crazy, and the screen has almost an inch of bezels around it.

These are the three components we’re lukewarm about. The camera, which records video at 720p 30 fps at its highest setting, is blurry. If you’ll be using it for casual web chats, it’ll be fine, above that, don’t expect high quality imagery here.

The Nitro 5 AN517-54-77KG uses a 17.3-inch, 1080p, 144Hz refresh display, which is still sharp and clear, but it appears to leans towards the darker side (even at its brightest setting), and is essentially the exact of bezel-free.

Finally, the laptop’s sound is fairly hyped on the high-end and quite echoey, but you can personalize it with the equalizer in the Dolby Audio software. Simply put, it’s another laptop with subpar audio – par for casual gaming, unless you’re Origin.

More reason most of us buy Acer’s Nitro 5s is the keyboard. There’s nothing overly special about it; the symbols are in red, the backlight is also in red, and the WASD keys are emboldened in red paint. Overall, it’s just your typical, middle-of-the-road keyboard. Having said that, we find it very comfortable as well as quite reliable.

You’ll find the keyboard fast and responsive, and you won’t experience any lags, missed presses or accidental presses – during work or play. As for the trackpad, it gives a lot of travel and is quite stiff. While gaming laptop trackpads are frowned upon in PC gaming, especially for FPS, RPG and action games, we expected something better here.

In general, the Acer Nitro 5 AN517-54-77KG gets a strong, though not always leading, performance across modern titles, though the GTX 3050TI graphics card doesn’t deliver the kind of performance you get from competing laptops with RTX 30-series graphics cards.

Powering the Nitro 5’s gaming engine is the Nvidia GeForce RTX 3050Ti GPU with 4GB of VRAM. So, what does that mean? Well, with such a graphics engine, you can cruise England’s sprawling countryside at over 58 frames per second in Assassin’s Creed Valhalla at Ultra, 1080p settings. And, it means a few other things too.

Surprisingly, the Acer Nitro 5’s battery lasts longer than you’d expect of any budget gaming laptop. Overall, gaming laptops are notorious for their bad battery life, and we’re surprised that this guy could crank 4 hours 13 minutes at 50% brightness.

This is partly to the newer energy efficient 10th-generation processor, and the not-so-bright display that doesn’t consume much battery.

Hardly the gaming laptop of your dreams, but this year’s Acer Nitro 5 has got a big screen and audio that are accurate if not exemplary. Its keyboard is probably the rough stone here, but you’re still able to get a perfect external gaming keyboard/mouse combo. 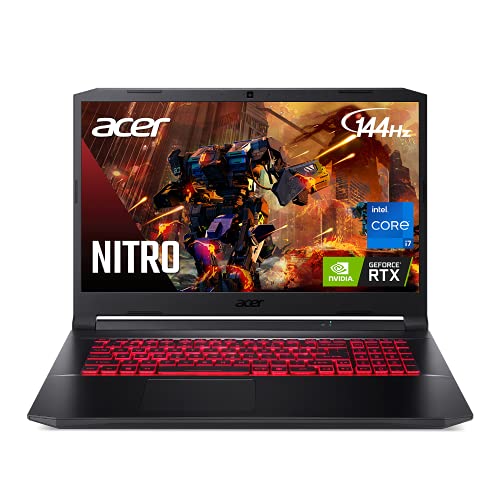 The biggest concern with this laptop is the price. Normally, Acer Nitro is a budget line, but above one grand – even if you’re getting a 17-inch screen, this laptop is actually more than its 15.6-inch Acer Predator Helios 300 counterpart, with the same Core i7 processor, but a more powerful Nvidia RTX 3060 graphics card. It remains our Editors’ Choice for midrange gaming laptops.

If you’re a hardcore gamer with hardcore demands, you better look elsewhere. But if you’re on a budget – or just settling into PC gaming – and you’re willing to compromise on a few things for a big screen, the Acer Nitro 5 AN517-54-77KG is definitely an option worth considering.